Many a time in life we are hit with adversities that we dread the most – like the fear of something terrible happening to our loved ones. While we fight with it, sometimes we lose and sometimes we win it. But only few can channelise that fear, anxiety and indomitable faith into something that goes onto inspire several others.

SRFTI student and animator Suchana Saha is one of them whose animated short, Maa Tuki (translates to Find me, Mother) is inspiring innumerable people and their families battling cancer. Saha’s award-winning short has been made online this weekend and is presently streaming on Vimeo.

“Maa Tuki was born out of a hope, a fear, a prayer and a fight to survive. It is based on the story of my mother and myself. I was working on a different story when my mother was detected with breast cancer. I was then rigorously researching about her treatment, and while I accompanied my mother to hospitals, we came across fellow fighters and their stories. Cancer is more of a mental depression than anything else and while researching I realised how important mental strength is. My mother is a very strong woman and I got inspiration from her to move forward with this story. With Maa Tuki, I wanted to share the story of hope and dedicate it to all the fighters,” Saha told Animation Xpress.

Breast Cancer is widely common in women worldwide, and if detected at an early stage it can be cured efficiently. The final year animation student hence chose her mother’s birthday, 8 October, to make the film live online as an ode to her strength and perseverance.

As her mother’s treatment and the film’s pre-production was happening parallelly, Saha received strong support and help from her friends and family. Hemanth Saju helped her in shaping the story, while Ruchika Gupta, Sneha Das, Sidharth Raj, Dibakar Saha and Shireen Ghosh pitched in to help Saha whenever and wherever needed. The animated short film took her around 10 months to complete from ideation to execution using Celtx for scripting, Monkey jam for Line testing, Adobe Photoshop for cleanup, Adobe Premiere Pro for editing, Adobe After Effects for composting, Pro tools for sound mixing and Qube Master Pro for DCP render.

The animation is simple, neat, yet moving and perfectly manages to strike the emotional chord. Taking us through the process of animation, Saha shared, “The animation is classically hand-drawn and coloured with watercolour. Classical animation gives a very organic feel to the subject. After the story was visualised, the script was penned accompanied by thumbnails. Once the script was finalised, I started with the storyboarding, followed by character design and production design. A pre-production bible was created before starting animatics which was completed with scratch sound. Pre-production took around three months. Then we moved to animation and line testing started after locking the animatics. After cleanup of frames, Das transferred the frames to water colour paper. It was needed to bring out the nostalgia, to attain the overall translucent and faded mood I wanted. The emotion is so delicate that bright colours would have been inappropriate. Finally, compositing of the water colour frames with background was done before final sound recording and designing.” 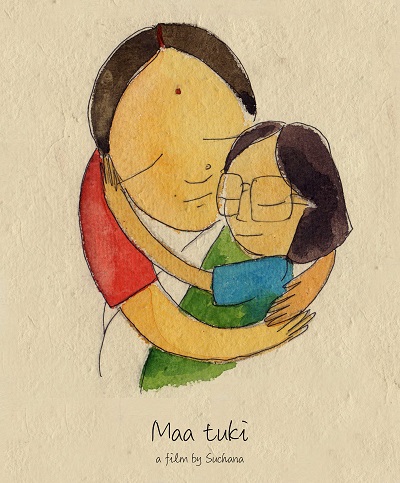 To date, Maa Tuki has received 13 awards, 44 nominations at International film festivals across 18 countries. The list is pretty long; some of them are:

Additionally, it received several other nominations and also got screened in hospitals, Rotary Club and other places. Maa Tuki is an honest attempt to tell a story of fight and hope through animation. The creator/director leaves on its viewers to decide the takeaway message.