Produced by one of the leading animation studios, Cosmos Maya, Titoo, is an addition to POGO’s rich portfolio of locally-created animated content. The series follows the daily escapades of an eight-year-old Titoo, who’s a good-hearted, intelligent boy. He loves to help everyone, but inadvertently manages to bring in more trouble. 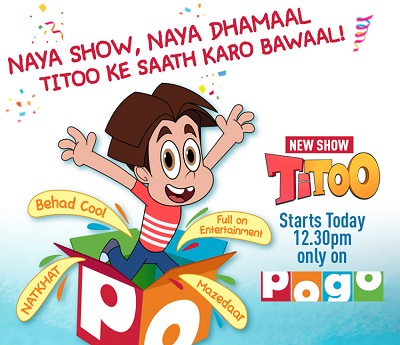 Titoo’s typically Indian yet wildly eccentric world, includes his parents, his loving and protective brother and a faithful gang of friends, all with unique, quirky personalities.

The new animated show is hilarious, full of entertainment and light-hearted. Titoo always gets himself into trouble for his trickeries along with his friends but the clever and enterprising boy always comes up with a solution! Besides Hindi, Titoo – Har Jawaab Ka Sawaal Hu is also available in Tamil.