Animated film Winnipeg, The Ship of Hope has been selected as Cartoon Movie 2021 and nominated at the Eurimages Development Awards.

The feature film, a Spanish (Catalonia, Basque Country), Chilean and French co-production, tells a hardly known event in History, the odyssey of the vessel Winnipeg.

Created in the year 1999, Cartoon Movie is an event where projects are presented with the aim of creating a worldwide synergy between film producers, investors and distributors of animation feature films. Film producers have the opportunity to present their projects to potential financial partners, to be able to find co-producers, to speed up financial aspects and negotiate agreements with distributors, commercial agents and video game companies. 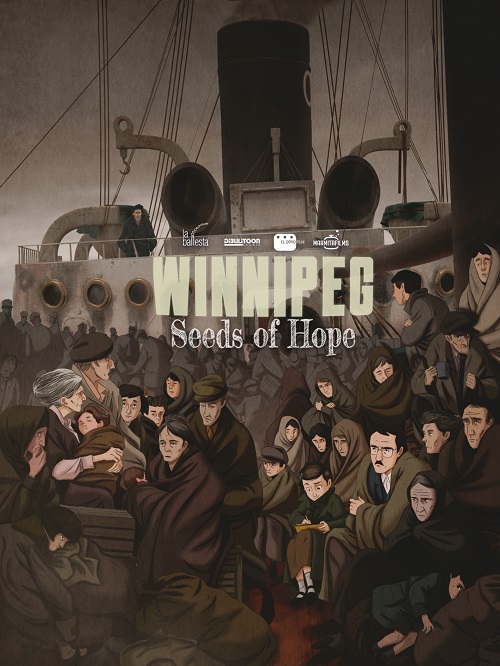 Cartoon Movie is a market held yearly in Bordeaux during the month of March. This year the event will be 100 per cent virtual, and will take place from the 9 to 11 March. Projects will be presented in video format and must have a duration of 20 minutes. After the video has been released on the platform, two of the team members may interact with the assistants in order to respond to doubts, questions and comments.

Winnipeg, the Ship of Hope will be presented to the Eurimage jury on 5 March, as well as on a virtual screen sharing platform.

Eurimages was established in 1989 as a cultural support fund by the European Council, and currently promotes the production of independent films providing financial support for their production.

The project Winnipeg, the Ship of Hope (Winnipeg, Seeds of Hope is its provisional title in English) tells the barely known but fascinating odyssey of two thousand four hundred Spanish exiled refugees, who during the final stages of the Civil War crossed half the world in order to find a new life in Chile on board of the Winnipeg, a small liner. The initiative was led by the Chilean poet Pablo Neruda, together with his second wife Delia del Carril. In a dark time when thousands of Spaniards were forced to flee their country in order to save their lives and were interned in refugee camps, the odyssey of Winnipeg became a symbol of hope and future.

The project, in full development, had previously won the Iberoamerican Animation League award on its special 2020 edition. The League is organised by Animation! (Ventana Sur), the Pixelatl Festival and the Quirino Awards, in collaboration with the Annecy Festival and its market, MIFA. It has also counted with the financial support of the Chilean Government through CORFO for its development phase.

Winnipeg, The Ship of Hope arises from the initiative of Toni Marin Vila, (executive producer of animation feature films such as Wrinkles and with an extended experience in the animation world at production companies such as D’Ocon Films and Cromosoma), who became interested in the original graphic novel written by the canary author Laura Martel, and decided that the story should be adapted to an animation feature film, due to both its historic and emotional relevance.

As the project required a solid co-production structure, he consolidated a natural and organic agreement with Midralgar (Marmita Films) from Bordeaux (Tout en haut du monde, L’extraordinaire voyage de Marona) at the port from which the Winnipeg set off, and with El Otro Film, of executive producer Marianne Mayer-Beckh, (El príncipe, Dry Martina y Rara) in Chile, at the port of arrival of this fascinating adventure. To all this we must add the vast experience of the oldest film production company of the Basque Country, Dibulitoon Studio (Elcano: la primera vuelta al mundo or Elcano: The first to Navigate Around the Globe, Yoko y sus amigos or Yoko and his Friends, and Papá, soy una zombi or Dad, I’m a Zombie).

This feature film project will be directed by Elio Quiroga and Beñat Beitia. Laura Martel has adapted her original graphic novel and has co-written the script with Beitia and Quiroga.

This animation film is a co-production between three countries: Chile (El otro film), Spain (La Ballesta y Dibulitoon Studio) and France (Midralgar). The composer of the soundtrack is Diego Navarro, from the Canary Islands. The project is conceived as a sort of twinning agreement: a Canary script writer, a Basque and a Canary film directors, Catalan, Basque French and Chilean producers, a Canary composer, creating a mosaic based on creative collaboration and solidarity.

Part of the project development, including the making of a teaser, has been possible due to the participation of the Canary enterprise 3Doubles, led by Darío Sánchez, well known for their projects such as Momonster or ARPO the robot.

Beñat Beitia, is a highly experienced graphic creator, director, producer and artistic director of well known animated productions such as Cher Ami, Yoko, o Black is beltza, among others.

Elio Quiroga, director of Fotos, has directed animated shorts such as Home Delivery (2007), a Stephen King adaptation presented by Guillermo del Toro, Me llamo María or My Name is María, which qualified for a 2010 Oscar Nomination, and Whence comes the rain (2019).

Laura Martel on the other hand, has written feature films such as Todos se van or Everybody Leaves, and the series iFamily. The award winning composer of international renown Diego Navarro, is currently considered in Spain as one of the main voices in film soundtracks. Amongst his works, some outstanding scores which have received multiple nominations and awards: Atrapa la Bandera or Catch the Flag (Goya award for Best Animation Film),  El fotógrafo de Mauthausen or the Photographer of Mauthausen, and Pasaje al Amanecer or Passage to Sunrise, among others.