The VES Lifetime Achievement Award, bestowed by the VES Board of Directors, recognizes an outstanding body of work that has significantly contributed to the art and/or science of the visual effects industry. VES will honor Dykstra for his vision and dedication to the craft of visual effects and storytelling while leading the forefront of groundbreaking visual effects and technology. He was hugely successful in cultivating talent as one of the creators of Industrial Light and Magic and in assembling key “Star Wars” crewmembers, which developed benchmark motion control and blue screen technologies under his guidance – which he continued at Apogee after leaving ILM. The broad impact of his work can be seen in his vast contributions to feature films, commercials,theme park entertainment and video games. 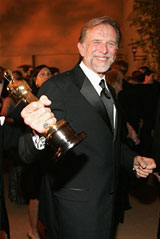 Dykstra received Academy Awards for his stunning work on “Star Wars” and later for “Spiderman II.” He was presented with an Academy Technical Achievement Award for the Industrial Light and Magic facility itself. Dykstra also received Academy Award nominations for his work on “Star Trek: The Motion Picture,” “Stuart Little” and “Spider?Man” and received an Emmy Award for “Battlestar Galactica.” Among his many accomplishments, Dykstra also supervised visual effects for “Firefox,” “Batman Forever” and “Batman & Robin” and designed the visual effects for “Hancock,” “Inglourious Basterds,” “X?Men First Class” and “Django Unchained.”

“John is an amazing creative force – talented, generous and visionary,” said Jeffrey A. Okun, VES Board Chair. “He has the extraordinary ability to create or combine seemingly disparate technologies to brilliantly enhance the art of storytelling and this talent has brought us some of the most memorable tales of all time. His leadership and pioneering work has truly raised the bar and helped redefine entertainment and our industry on a global level.”

“I am greatly honored to join the prestigious company of artists and visionaries who have received this award from the VES,” said Dykstra. “I love my job and it is particularly gratifying to be recognized by my peers for contributing to the artistry and invention that is visual effects.”