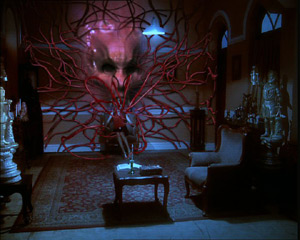 Some time ago it was just movies, be it Bollywood or Hollywood, in which we saw amazing VFX work. Then it was the big budget TV shows from Hollywood and the west that boasted of Feature quality effects. As time goes by, we are now witnessing quite a few hi-end prime time shows on Indian Television that are increasingly upping their usage of FX.

One example of such a show is Ssshhhh!!Phir Koi Hai, which is aired weekly on Star One.

Speaking to AnimationXpress.com about the show, Rohit Vaid of Contiloe shared, “We at Contiloe films make a weekly television series for Star One, “Ssshhhh!!Phir Koi Hai”. The flavour of the show is horror and we use state of the art Computer Graphics tools to bring the otherwise non realistic and fantastical stories to life. The duration of the show is roughly 44 mins. And the Graphics are extensive. Presently we have ‘MEL‘, ‘Colour Cubes‘ and our in house CG team at Contiloe doing the VFX work for us. We have already shot 12 episodes and the range of the kind of FX we have been doing is vast. From simple rotoscopy to very complicated character animations, we have incorporated most of the popular visual effects in our episodes.”

On the same note CB Arun Kumar, VP, VFX Maya Entertainment said, “For the first time in a Regular TV series we decided to execute high end VFX involving Match Moving, Complex Digital Environments and Creature Creation of a level normally reserved for feature films. We then did extensive Color Correction of all elements to get the look and feel of the programme just right.”

Being a weekly, Ssshhhhâ€¦Phir Koi Hai has a different story every week.

Talking about the most difficult episode to do VFX for, Rohit said, “The most difficult episode to shoot was definitely Haunted House. It was about this place, which was alive. It used to consume whoever entered the house to keep it that way. We had to create many things graphically to make the house look serious. There were veins running through the walls. The hall morphs into a huge mouth of the monster house complete with tissues, some creepy looking pasty liquid, and a set of teeth. The monster house had limbs, which it used to pull people into the walls. In the climax of this episode, the entire fa?§ade of the house morphs and gives way to a very scary face of the house. The job to bring this house to life was given to “MAAC” and they did an extremely good job with it.”

In every episode there are about 10-40 VFX shots and as per the studio, it takes around five to six days to complete the.

Speaking about the challenges they face while doing these VFX shots Rohit said, “The challenges range from the exact look of the CG to the tracking of the animation. Also a lot of planning and intricate issues that need addressal. Sometimes the look just doesn‘t seem right in terms of the way we have mounted the CG, so it needs to be redone. The whole problem is one of being only able to say if the CG works, after it is been composited.”

Himanshu Bandiwadekar VFX supervisor of Color Cubes also added on the challenges faced, “Doing a sequel to a hugely popular VFX show, the biggest challenge was to do something beyond it. By incorporating seamlessly blending character animation, motion graphics and particle simulation, we have set a benchmark to do even better.”

“We plan to enter an entirely new realm of possibilities with computer graphics in the coming episodes. We intend to make them subtler and smarter. Also we are at the threshold of creating some very cutting edge stuff for TV, keeping the obvious time frames of TV dispatches and t/x etc in mind. This is the future and we want to be amongst the leaders”, concluded Rohit.