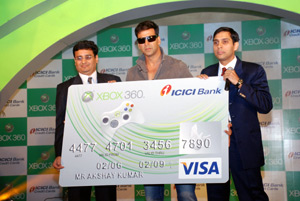 Microsoft Entertainment & Devices Division has announced the launch of its two new games â€?Gears of Warsâ€? (GoW) and â€?Viva Pi?±ataâ€? in India, for their next generation gaming console Xbox 360.

Speaking to AnimationXpress.com Ashim Das Mathur, Marketing head, EDD, Microsft India, shared, “with leading international games like GOW hitting the Indian shelves simultaneously, they are going to create a huge impact on not only the gaming community but to get the new users into the fray. The quality of the game play, hi def visuals, Dolby digital sound and the over all utility of Xbox 360 as a digital entertainment device will surely get new users into the gaming zone.”

The forthcoming gaming titles on Xbox 360 are â€?Dead or Alive Xtreme 2â€?, â€?Lost Planetâ€?, â€?Superman Returnsâ€?, â€?Call of Duty3â€?. The titles are priced at Rs. 2,510 each and will be available to gamers through Microsoftâ€?s network of resellers across major cities in the country.

“Gears of War sold about one million copies worldwide within two weeks of its launch and have been the fastest selling game on Xbox 360. It is a third-person tactical action/horror game and is the first game developed by Epic Games for Microsoft Game Studios and the Xbox 360 video game and entertainment system.” Says an official release issued by company.

GOW thrusts gamers into a deep and harrowing story of humankindâ€?s epic battle for survival against the Locust Horde, a nightmarish race of creatures that surface from the bowels of the planet and utilizes the breathtaking new Unreal Engine 3 to create cinematic, beautifully rendered interactive environments with high-definition visuals for a gaming experience that truly ushers in the next-generation.

Viva Pi?±ata invites game-players to escape to Pi?±ata Island, where wild-roaming, living Pi?±ata animals are looking for a home. Viva Pi?±ata from Rare and Microsoft Game Studios is rated “E” for Everyone and is available on Xbox 360.