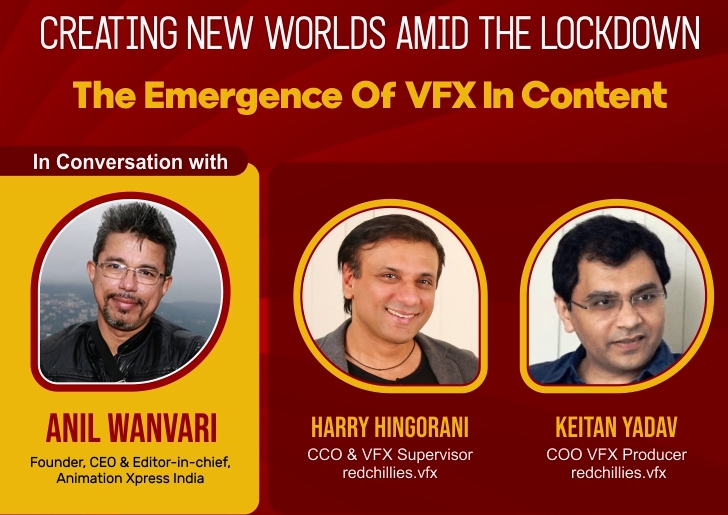 VFX Industry has set an example by quickly recovering from the setbacks caused by the pandemic with a range of work-from-home-friendly solutions and remote pipelines. We, at AnimationXpress, have been speaking to various national and international VFX studios to understand how VFX studios are continuing their operations despite the Covid-19 crisis.  Recently redchillies.vfx chief operating officer and VFX producer Keitan Yadav and chief creative officer and VFX supervisor Harry Hingorani spoke to Indian Television Dot Com Group founder & editor-in-chief Anil Wanvari in a candid conversation, opening up about the — Covid-19 crisis, Remote VFX Pipelines, Workstations, Future of filmmaking and Bollywood projects.

Keitan Yadav currently helms the Business Development & Operations for both divisions: Redchillies.vfx & Redchillies.color. Having started his career in 1996 and spending 8 years in the advertising industry, Keitan forayed into the Film Vfx world in 2003. His first movie as Vfx Producer & Supervisor was with Shah Rukh Khan’s maiden venture ‘Main Hoon Na.’ Keitan has been honoured with the National Award in 2011 for ‘Ra.One’ as it set a benchmark in the realm of visual effects in Indian cinema. Other awards include 4 Filmfares, 5 IIFA and many more. With his ability to render cross functional leadership, he maneuvers the technology department, programming, production, content management, finances and eventually creating the studio to become dexterous in terms of possessing leading-edge hardware and software.

Harry is the creative back bone of the company. With 21 years of expertise in the industry, Harry has worked on over 200 ad films and numerous feature films.His attention to detail, untiring passion and creative wizardry is an inspiration to all at the studio. Under his supervision, redchillies.vfx continues to venture beyond limitations, aiming to produce imageries that create fascinating experiences for filmmakers and audiences alike. Harry was also honoured with the National Award in 2011 for Ra.One as it set a benchmark in the realm of visual effects in Indian cinema.

Here are the excerpts :-

Tell us about rechillies.vfx work-from-home pipelines. Harry – We have got a good software set-up to work remotely, some of which work on mobiles as well. We have created a successful work-from-home infrastructure and it is working effectively, we have about 300 people working from home. Employees’ safety is our utmost priority . Keitan – Due to concerns around security, bandwidth and piracy etc, we never thought about working from home before the Covid-19 pandemic. But necessity is the mother of all inventions and our pipeline is set. Tell us about some of your recent projects that you have worked on remotely? Keitan –We have completed Radhe, Gunjan Saxena, Class of 83 and working on Laal Singh Chaddha while working from home remotely and we are very proud of it.

The office that SRK gave for Covid-19 care is the same office where we started redchillies.vfx

You recent project Bulbbul was spectacular. Tell us about your creative approach vis-a-vis the imagery and the VFX of the film. Harry – We got the production designer to paint the Haveli so we could get the reference and then we created a 3D model and scanned it. And most of the scenes in Bulbbul are shot in chroma. We delivered around 1000 shots for Bulbbul. Storyboarding and previsualisation helped in the production of the movie. Artists, at times, feel overworked. But times are changing. What do you have to say about the work-life balance in the VFX industry? Also could you tell us about the movie Zero and the techniques that went into the creation of its imagery. Harry – ‘Zero’ is a big example of how our pipelines were so well planned that we didn’t overpressure our workforce. Keitan – “According to me, ‘Zero’ was a technological marvel. But unfortunately in Bollywood, when a film doesn’t work, other aspects also go unnoticed  Harry – We went to New York and saw what Technodolly can do. SRK was so accommodative to our demands. We bought Technodolly which made it easy for us to shoot the scenes faster for ‘Zero’ Any movies that you personally feel inspired by in terms of VFX? Any upcoming movie SRK is starring in that you can tell us about? Keitan – Waiting for ‘Avatar 2‘ which is apparently going to be shot underwater. James Cameron’s ‘Abyss‘ is the movie I watched at Sterling Theatre which is when I decided to embark on my VFX journey. Harry – We are discussing a few upcoming projects with SRK but we don’t know when it’s going to start. We are waiting for the announcement to come from him. What sort of latest technologies fascinate you? Which VFX technologies do you think can help filmmakers during the pandemic or post-pandemic? Keitan – VFX is a beautiful industry which is an amalgamation of creativity and technology. Harry and Keitan – In pre-production, production and post production, VFX will play a big role. Virtual production and Unreal Engine are the talk of the town now. Projects that ideally take 60 days can be done in 40 days if you’ve planned it with the help of these technologies. Keitan – For VFX artists, this is the best time to upskill. Learn open source software like Unreal Engine. Because when things open up, you won’t have time to learn new things. So utilise this time to learn new skills