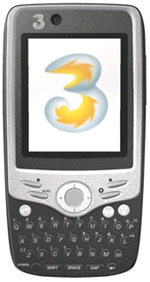 3G is an ITU (International Telecommunication Union) specification for the third generation of mobile communication technology which has increased the bandwidth approximately up to 384 Kbps and was first introduced on a commercial scale by Japan.The new EDGE (Enhanced Data rates for Global Evolution) air interface has been developed specifically to meet the bandwidth needs of 3G.

The services associated with 3G provide the ability to transfer both voice data (a telephone call) and non-voice data (such as downloading information, exchanging email, video, graphics and instant messaging).

3G enables high-speed throughputs, and in the future it’s networks are expected to reach speeds of approximately more than 2Mbps. It will work over wireless interfaces such as GSM, TDMA (Time division multiple access) and CDMA (Code Division Multiple Access).

3G technologies are turning phones into multmedia players, making it possible to download music and video clips. The new service is called the freedom of mobile multimedia access (FOMA) and it uses wideband code division multiple access (W-CDMA) technology to transfer data over its networks. W-CDMA sends data in a digital format over a range of frequencies which not only makes the data move faster, but also uses more bandwidth than digital voice services.

Code Division Multiple Access (CDMA) works by giving each user a unique code. The signals from all the users are spread over a wide frequency band. The transmitting frequency for any one user is not fixed but is allowed to vary within the limits of the band. The receiver has knowledge of the sender’s unique code, and is therefore able to extract the correct signal no matter what the frequency.

This technique of spreading a signal over a wide frequency band is known as spread spectrum. The advantage of spread spectrum is that it is resistant to interference – if a source of interference blocks one frequency, the signal can still get through on another frequency. It’s signals are therefore difficult to jam, and this technology was developed for military uses.

CDMA is a form of multiplexing, which allows numerous signals to occupy a single transmission channel, optimizing the use of available bandwidth. The technology is used in ultra-high-frequency (UHF) cellular telephone systems in the 800-MHz and 1.9-GHz bands.

CDMA employs analog-to-digital conversion (ADC) in combination with spread spectrum technology. Audio input is first digitized into binary elements. The frequency of the transmitted signal is then made to vary according to a defined pattern (code), so it can be intercepted only by a receiver whose frequency response is programmed with the same code, so it follows exactly along with the transmitter frequency.This enhances privacy and makes cloning difficult.

Time division multiple access (TDMA) is a technology for shared medium (usually radio) networks. It allows several users to share the same frequency by dividing it into different timeslots. The users transmit in rapid succession, one after the other, each using their own time slot. This allows multiple users to share the same transmission medium (e.g. radio frequency) whilst using only the part of its bandwidth they require.

Time division multiple access (TDMA) is digital transmission technology that allows a number of users to access a single radio-frequency (RF) channel without interference by allocating unique time slots to each user within each channel. The TDMA digital transmission scheme multiplexes three signals over a single channel. The current TDMA standard for cellular divides a single channel into six time slots, with each signal using two slots. Each caller is assigned a specific time lot for transmission.

The receiving equipment must be able to decode the received signal by decoding the received signal and reconstitute it using the same time slot selection algorithm as was used when it was encoded and transmitted. TDMA is used by the GSM digital cellular system.

One of the main disadvantages of TDMA is that each user has a predefined time slot. However, users roaming from one cell to another are not allotted a time slot. Thus, if all the time slots in the next cell are already occupied, a call might well be disconnected. Likewise, if all the time slots in the cell in which a user happens to be in are already occupied, a user will not receive a dial tone.

1.TDMA is the most cost-effective technology for upgrading a current analog system to digital.
2.Unlike the other spread spectrum techniques like FDMA(frequency division multiple access) which can suffer from interfernce among the other users who are on the same frequency band and transmitting at the same time,ensures that they will not experience interfernce from other simultaneous transmisions.

Some Applications of 3G

Advantages of 3G
1. New Technology which would help in reducing the voice & data traffic over the existing systems.
2. It has more bandwidth, security, and reliability.
3. Fixed and variable data rates while surfing the internet on the mobile phone, whether stationary or on the go.
4. The multimedia services that are provided by 3G are rich in quality.

5. Fast downloads of large files such as faxes and PowerPoint files.

Disadvantages of 3G
1. The cost of upgrading cellular infrastructure to 3G is very high as compared to the conventional systems.
2. It requires different handsets which are compatible with the same.
3. Base stations(for eg- When we talk on mobile phone, the signals from your mobile are being received and sent to a nearby base station. From that base station the phone call is connected into the regular land-line phone system by the mobile phone network) need to be much closer to each other and hence more stations have to be installed for better operability of 3G technology because of which the overall infrastructure costs increases.