9 Story Media Group has made new additions to its senior team of global executives across distribution, development, legal and technology. The strategic additions are pivotal in continuing to build the company’s growth internationally while developing its in-house capabilities and best practices.

Commenting on the latest appointments, 9 Story Media Group president and CEO Vince Commisso said, “Each of our newly appointed senior executives bring an impressive background and skill set in children’s media and we are extremely proud to welcome them. 9 Story is a global leader in children’s content and this talented team provides tremendous bench strength to support our ongoing growth efforts.” 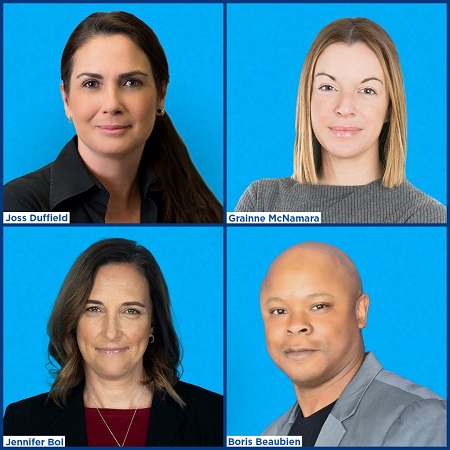 The team of newly appointments are:

Joss Duffield – Reporting to distribution and acquisitions SVP Alix Wiseman, Duffield joins the distribution team as VP, Distribution Europe. She is based out of London, UK and in her new role, Duffield will be responsible for 9 Story Distribution International’s business across Western Europe, continuing to build and bolster the division’s growth within these markets.

With over 20 years’ experience in international distribution, sales, and licensing, she has a proven track record of securing successful target driven strategic alliances and partnerships. As head of International Sales at eOne Entertainment, she was instrumental in the relaunch and world-wide rollout of the iconic Peppa Pig brand, transforming it from a local UK brand into the global phenomenon it is today. Most recently, Duffield served as Director of Content – Northern Europe at Turner, where she was responsible for a multi-genre distribution portfolio including drama (TNT), local European drama (TNT Germany), comedy (Adult Swim), non-scripted (Tru TV) and children’s (Cartoon Network) programming.

Gráinne McNamara steps into the new role of live-action, development and production VP and will be reporting to chief creative officer Angela Santomero. With over 20 years’ experience within the children’s sector, McNamara will be responsible for leading the company’s overall development efforts for original television series in live action kids and family.

McNamara is joining from King Bert Productions where she successfully grew a children’s development slate and produced the hugely successful Malory Towers for CBBC and Family Channel Canada. Prior to King Bert, McNamara worked as live-action development for Disney Channels EMEA head and before that she served as the development VP for Cake Entertainment where her credits included the award-winning Bottersnikes and Gumbles and Chicken Invaders In Space.

Jennifer Bol will be heading the global 9 Story legal team as legal and business affairs SVP. Responsible for establishing the global in-house practices that will set the strategic direction for 9 Story’s legal services worldwide, Bol will also be developing and implementing the organization’s legal and regulatory framework and collaborating with the Executive Leadership Team (ELT) to execute business strategies.

Bol is a Canadian and UK qualified lawyer with two decades of experience in entertainment law covering a wide range of areas including television and digital development and production, broadcasting and all aspects of distribution including television, format and merchandising licensing. Bol was most recently at Blue Ant Media where she served as senior legal counsel. She previously worked at 9 Story from 2012 to 2015 as Legal & Business Affairs director, where she was instrumental in the acquisition of the CCI Kids and Family catalogue, and has also worked as senior director at DHX (now Wildbrain) and company lawyer for Entertainment Rights (now DreamWorks Classics).

Boris Beaubien has been roped in to 9 Story’s Toronto team as technology VP, reporting to chief operating officer Cathal Gaffney. Beaubien is an Emmy nominated technologist and a veteran in the media industry, with over 20 years of experience across television production technology. Beaubien began his career as a technical manager on the hit series Blue’s Clues at Nickelodeon, eventually moving up to become VP of TV Production Technologies, overseeing all technical and pipeline support at the Nick Jr. animation studio.

He was also instrumental in the start-up of Nickelodeon’s CG animation studio in California, where he helped design and build their Burbank Animation and Live Action Studios. Most recently, Beaubien worked with Sesame Workshop to upgrade and refresh Sesame Street‘s 50th season and develop the technology for their slate of series for AppleTV.