VFX supervisor Sandeep Kamal: “I am still waiting to work on an assignment that will challenge me”

“Necessity is the mother of invention, when you want something badly, you can easily figure out a way to get it”

These are the words coming from a person who has been in the visual effects industry for more than 20 years and has bagged the National Film Award for Best Special effects in 2013 for Girish Malik’s movie ‘Jal.’ We should probably thank Steven Spielberg as he’s the reason behind Sandeep Kamal getting inclined towards filmmaking. A humble person at heart, Kamal’s liking towards filmmaking began when he first saw Jurassic Park. He witnessed the power of silicon  beyond CAD/CAM applications and dropped everything to figure out a way to get into filmmaking.

Being an artist as well as an engineer early on in his career, he thought he could understand the technicalities of software and use it in a creative way. And that’s exactly what happened next as he used VFX and animation as a back door entry into the storytelling world and has today built an impeccable reputation as a VFX supervisor and film maker. . 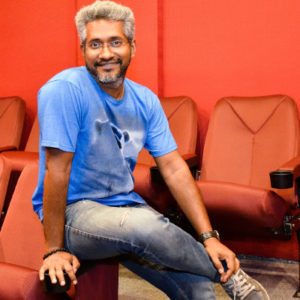 AnimationXpress.com got talking with Kamal about his journey into this interesting world of storytelling, collaborations between VFX studio houses and producers, and thoughts about the status of the industry.

It’s been a 20 year journey for you – you have witnessed a paradigm shift in the industry. Can you share your experiences?

I would say, I haven’t seen any paradigm shift in the industry. But I have seen an evolution – been part of it and evolved with it.

VFX is driven by three major components. The vision, which is more of a creative aspect. The technicality or methodology to achieve the vision and last is the cost component which enables the technician to achieve the ‘creative vision’. The evolution has majorly happened on the technical side, which includes hardware, software and production management side which has enabled the visionary to derive results which were impossible earlier in a given time, budget or because of the limitation of the technology.

My journey so far has been fulfilling as I was fortunate to wear different kinds of hats and learnt many new things along the way. I have worked as a concept artist, 3D generalist, animator, tracking and match mover, matte painter. Whenever and wherever there was an opportunity to try out something new, I jumped into it and learnt a lot. I have seen producers warming up to the idea of using VFX to complement and enhance their story and not just use it as a mean to salvage bad shots. Though salvaging bad shots will always be a part of a VFX deal, but more and more producers have started to acknowledge its importance in making their canvas larger.

Which projects are close to your heart?

I enjoy every project but Sujoy Ghosh’s Kahaani is closest to my heart as far as the final result goes. It was not an easy one. It taught me so many things in life apart from seamless execution of VFX.

Which has been the most challenging project?

So far, nothing has been challenging for me. I am still waiting to work on an assignment  that will challenge me to test my limits at that particular time. As I said, Jurassic Park in 1994 was the reason I got into VFX, and even after 23 years, I don’t have anything even close to Jurassic Park in my credentials as a supervisor or a director.

The challenge will be when I have to do something that will become a milestone in the industry.

How can a fruitful collaboration take place between filmmakers and VFX houses?

The right synergy between the film producer and VFX producer, respect for each other’s contribution, professionalism in dealing, accountability of all the creative decisions by the director and VFX supervisor can make the collaboration fruitful for the both parties.

What are the key things a VFX supervisor needs to keep in mind while accepting and delivering a project?

A VFX supervisor has to always align with the VFX producer and understand if the visual expectation of his client is in sync within the given budget. He has to know that it’s not just him, but many others who will be involved in the process of delivering the result. He has to be practical in his demands and expectation from his team and the production management. As we can see from so many past examples, it’s the over ambition of the director and VFX supervisors to deliver something in unreasonable timelines and budgets that have resulted in disaster.

How do you handle creative differences between the director and you?

There cannot be any scope for creative differences with the director at all. On the set it’s clear, the right to creativity only belongs to the director. The VFX supervisor is just a technical agent for the execution just like a cinematographer and production designer. We get an opportunity to discuss and present ideas and creative thoughts on the  sets but cannot dictate what finally shows up. While we get full freedom to execute things technically.

Being an industry veteran, what about a project should excite you before you take it up?

I am not a veteran yet. But to answer your question, I always like to read the script of the film before I agree to work on it. I like to work in a film that works in total as an entertainer and not just because it is loaded with VFX. And sometimes I don’t have a choice when any of our friends are producing or directing a film.

Why did you decide to become a freelance VFX supervisor?

I wanted to focus on my career as a director doing more creative work and not spend my time in managing the business, so the only way was to become independent. I direct TV commercials and whenever there is an opportunity I work more as a VFX director. The arrangement with Drishyam VFX takes away the pressure of managing business and think freely of newer ideas.

Recently, you delivered two projects: Te3n and Kahaani 2. How was the experience working with Drishyam VFX?

While I was involved through the shoots of both the films, I had to travel abroad many-a-times during the post-production phase and the team at Drishyam gave me enough confidence to not worry about the execution. I was working remotely with the team over the internet and everything went smoothly.

In-house supervisor Mrityunjay Singh was a great support and resourceful in achieving fantastic results in given timeline. Rajeev Kumar also provided me with excellent support.

Why did you choose Drishyam for it?

I use to have my own post-production company earlier and the pressure of managing the business was not allowing me to satisfy my personal creative ambition, so I decided to scale down the post-production business to just a production house focusing on contents and ad film production. That’s when I felt the need to associate myself with another post facility that would help me to handle all the post production needs without worrying about the business aspect of it. I had few friends, who were working with Drishyam. After meeting Rajeev and Raghav, there was no second thought. The entire composition was suitable for us. The relation has worked great so far.

You have worked with many studios in the past. Drishyam being a young studio, what do you think about the team? How different are they from other studios?

Yes, I have worked with many studios in past, right from Prime Focus, Avitel, EyeQube, Intermezzo Studios and inCandlelight. They all had their own uniqueness and cannot be compared with each other. Everyone delivered good work in their different ways. The difference is in the size, credentials and the opportunity each one has but the most important and common thing among them is people with passion. Today, everyone is technically and creatively capable, but what differentiates each is the kind of opportunity they get. Once you have the opportunity, it’s easy to scale up and figure out the solution.

Drishyam not only being a young studio also has a young leader like Rajeev Kumar and young supervisors. What do you think?

Young is always good. Young have more energy and fresh ideas, more passion. And it’s always someone young who bring about change.

If you look at all the success stories across different industries, it’s the young with no or less experience who bring revolution. Windows, Macintosh, Facebook, Angry Birds , Prime Focus, there are many examples. The experienced ones take less risk. They are careful and focus on stability which makes them take less risk. Without risking you cannot innovate or discover new horizons. I think Drishyam is a good combination of young talent, which takes advices from experienced people but makes its own decision.

How important is it for the VFX artists to stay abreast with the technological advancements?

I would say you have to evolve or you will be extinct. If you want to lead youngsters, you have to keep yourself updated or you have to give way for them to lead you. It is as simple as that.

What is stopping the Indian VFX industry from being on par with the global giants? How can this scenario be changed?

Only opportunities were the roadblocks so far, but in  the  recent past we have seen quite a few studios have crossing over and collaborating on international projects successfully. So I see that scenario has already changed. But you cannot expect every studio in India to be catering to the international demand, and not everyone has to.  The logistics of working across the globe have their  own challenges, so we cannot expect every Hollywood film to happen in India.

Where do you think is the industry headed?

I don’t know where the industry is heading, I am just enjoying the journey.

Which projects are you currently working on?

At the moment, I am working on a feature film whose name I can’t disclose at the moment, various commercials and few other projects are in talks.