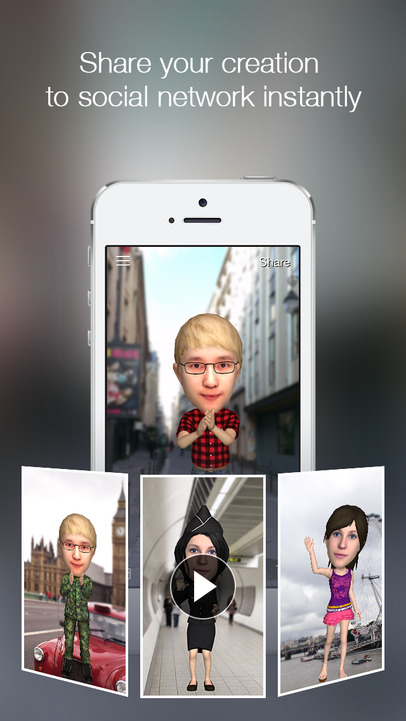 Speed 3D Inc. which was established in January 2014 in Taipei, Taiwan has released its first mobile app Insta3D, the world’s first app that can turn a single photo into a person’s identical and animated 3D avatar.

“Insta3D uses face detection and cloud computing technology to analyse the facial features in the photo to generate a 3D head model on the cloud. The 3D model then is quickly sent back to the end-user’s phone for further customisation. The whole 3D modelling process takes only 10 seconds under 3G or Wi-Fi connection,” said Speed 3D CEO, Marvin Chiu in a statement.

Along with this Insta3D also provides the app users hundreds of accessories, including glasses, hair styles, and outfits. The user can further improve the avatar’s personality by changing its mood – laughing, angry, sad, or surprised, and applying different animated body languages, such us cheering, dancing, and fainting movements to the avatar. The tailored 3D avatar then can be saved and shared as photo or video to impress friends and family on social networks.

“In the future, Insta3D will regularly release new contents with more accessories and body motions through In-App purchase to our users,” added Chiu.

In order to provide high quality contents in Insta3D app, Speed 3D has joined hands with the Next Media Animation, one of the largest animation studios in the world.

“Next Media has been producing 3D animation for many years and has accumulated a great variety of 3D models and actions. We look forward to witnessing Insta3D’s utilization of these contents in a whole new direction,” said Next Media Animation CEO, Kith Ng.

Speed 3D partners up with one of the top 3D printing service providers in Japan in order to deliver the 3D-printed personalized avatars for the customers. Insta3D users will soon be able to print out their own 8-inch avatars using the highest quality 3D printing technology.

Marvin Chiu said, “We have researched many 3D printing companies in Asia, and we were amazed by the impeccable quality delivered by iJet.”

“We truly believe Insta3D’s 2D-to-3D technology for people will become a huge trend in the future,” added President of iJet, Masaru Kumehara.

All the selfie freaks can download this app on iPhone, iPad and Android Phones.