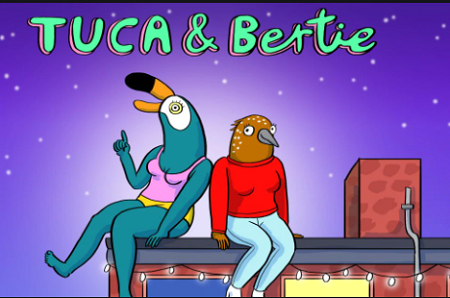 Tuca & Bertie has been renewed for a second season as Adult Swim has revived the series that initially streamed on Netflix.  The animated series was a hilarious and wonderful examination of adult relationships, coupled with whimsical visuals with a feel-good factor. The show received critical acclaim being referred to as one of the best shows of 2019.  But in July 2019, the series was discontinued after the very first season, sparking controversy over Netflix’s inability to market the show to a wider audience. Yesterday, 22 May, creator Lisa Hanawalt herself (the cartoonist behind BoJack Horseman’s visual style) took to Twitter to announce that the show would be returning with a new home- Cartoon Network’s late-night programming block Adult Swim and will premiere in 2021.  Tuca & Bertie starred comedians Tiffany Haddish and Ali Wong as two mismatched bird best friends with a supporting cast including Steven Yeun, John Early, Richard E. Grant and Reggie Watts.

Tuca & Bertie follows “the friendship between two 30-year-old bird-women who live in the same apartment building – Tuca, a cocky, care-free toucan; and Bertie, an anxious, daydreaming songbird. The move marks a reverse of the more “traditional” model of Netflix picking up canceled network shows, though Tuca & Bertie isn’t the first to pull the reverse-Netflix. Hanawalt also served as the executive producer alongside Raphael Bob-Waksberg, Noel Bright, Steven A. Cohen, and Haddish.

Let the party begin. A new season of Tuca and Bertie is coming to Adult Swim in 2021. @aliwong @TiffanyHaddish @lisadraws pic.twitter.com/dmR9yUaTMz