Latest News
On 5 January, the country woke up agitated and infuriated due to the vandalism and hooliganism of alleged ABVP (Akhil Bharatiya Vidyarthi Parishad) members at India’s one of the premier educational institutions, JawaharLal Nehru University (JNU). The masked people barged into the hostel and attacked students with iron rods, lathis and hockey sticks on Sunday evening. This incident shocked the country as well as the international milieu, and triggered its citizens to rise up in rage against injustice and Delhi Police who stood like mere spectators while the horrifying incident took place. Instead of taking actions against the attack, they filed an FIR against JNUSU president Aishe Ghosh who suffered severe head injury due to the attack. 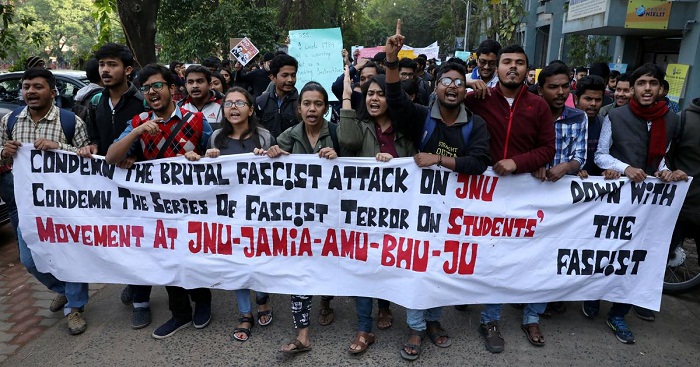 With whatever unfolded before and after the incident, reports suggest that this attack was executed on a group of students who were protesting against the fee hike and an ongoing admission process. The country has continued to witness a lot of tension over the past few months due to the protest against the CAA (Citizenship Amendment Act) and NRC (National Register of Citizens). Few media personalities and protesters have opined that these incidents might be connected. The incident made thousands of people come down in large numbers across the country on streets in solidarity with the victims of this brutal attack, opposing the system. Though the blame game continues on one another (ABVP and Leftist Student Council), physical assault and harming disabled students is unpardonable. Cities that erupted in protest in solidarity with JNU are – Kolkata, Mumbai, Hyderabad, Chennai, Ahmedabad and a few districts. 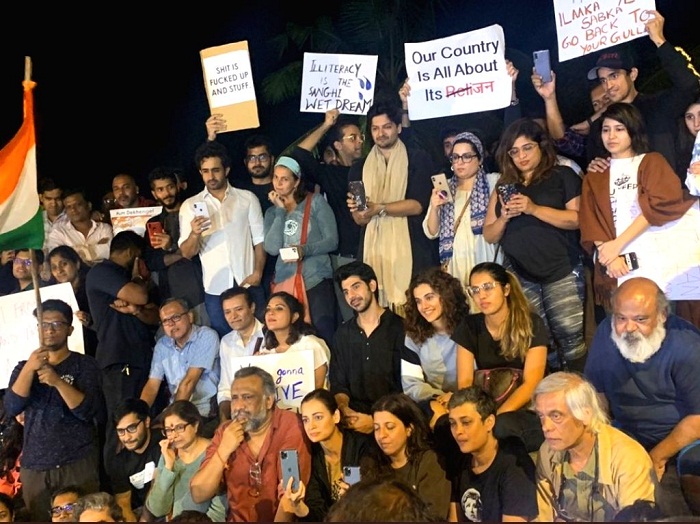 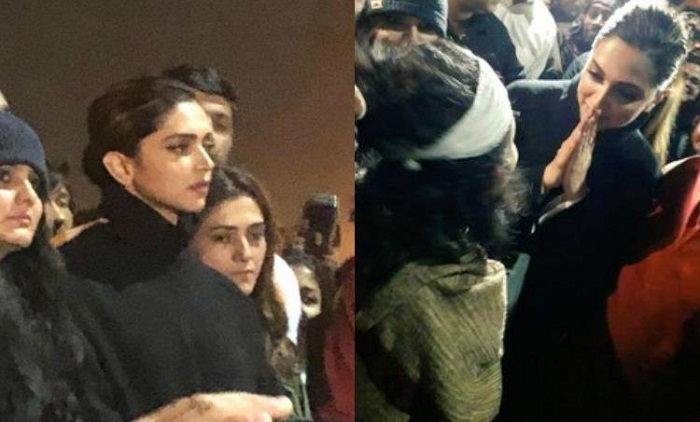 A post shared by Upamanyu Bhattacharyya (@upamanyubhattacharyya) on Jan 7, 2020 at 3:33am PST

A post shared by Upamanyu Bhattacharyya (@upamanyubhattacharyya) on Jan 5, 2020 at 9:53am PST

Satrajit Choudhury – artist at Comics by Satra Satrajit Choudhury published an artwork titled ‘Wonder Women’ featuring Deepika Padukone and Aishe Ghosh. Padukone has received both applause and brickbats for joining the protest with JNU students and JNUSU former president Kanhaiya Kumar.  Commented Choudhury, “Violent attacks on any student community must not be tolerated at any cost. The students, irrespective of their political beliefs, deserve to be supported by every means. Big thanks to Bollywood for standing by them.” Charbak Dipta – graphic novelist Dipta has always voiced against the wrongdoings and through his artworks which are stunning and sometimes strongly political. He shared his artwork ‘Not in My Name’ and termed it as the “The Saffron RavanVadh in the Utopian Ram Rajya” where Ram says “There’s a limit!”                                   He shared another strong image, titled ‘Taare Zameen Par’ depicting the expectations that most of us have from the three Khans of Bollywood, who have been silent till now. Abhishek Choudhury – designer and illustrator Based out of Guwahati, Assam, Choudhury has witnessed the tense situations and internet shutdowns in Assam due to the protests against CAA. Channelising his creative talent to lay out his strong political and humanitarian message, he has created strong posters. Said he, “When the news of the attack poured in of the attacks at JNU, and the attack was still on. We were getting live updates about the attackers and it was horrifying. I felt so angry, sad and more so,  helpless. I couldn’t sleep that whole night as the heart wrenching image of Aishe’s bleeding face kept haunting me. They are students. My sister was one of them until last year. No one goes to university to face violent mob attacks. Least of all face attacks from your own government. So, at moment, I did the only thing that could give me some peace of mind. I made a poster in a cathartic outburst voicing my feelings that ‘Enough is Enough’ and that we will not forgive, neither forget, nor back down. These kinds of coordinated attacks on students have got to stop. This has gone too far now.  It’s great to see the artist community come out to show solidarity to the movement. But I feel we need to step up our game now. We are the Creative ones. We are the outliers. If we don’t use our collective creativity for the greater good now then we would have failed as free thinkers. I hope this is just the beginning.”

Amalendu Kaushik – animator and filmmaker Kaushik, too is originally from Assam and has made acclaimed short films and is researching further on Asssam’s history and culture. He has actively participated and contributed in expressing his thoughts on the heinous crime of making innocent and unarmed students subject to oppression and physical assault. Mentioned Kaushik, “As the young/future generation of the country, we are really concerned about the fabric of this country and how it is getting shaped. Whatever happened with JNU, attacking students was totally an inhuman act. We must fight back with more debates, art and discussions against this fascist rule. We totally stand in solidarity with the students of JNU.” 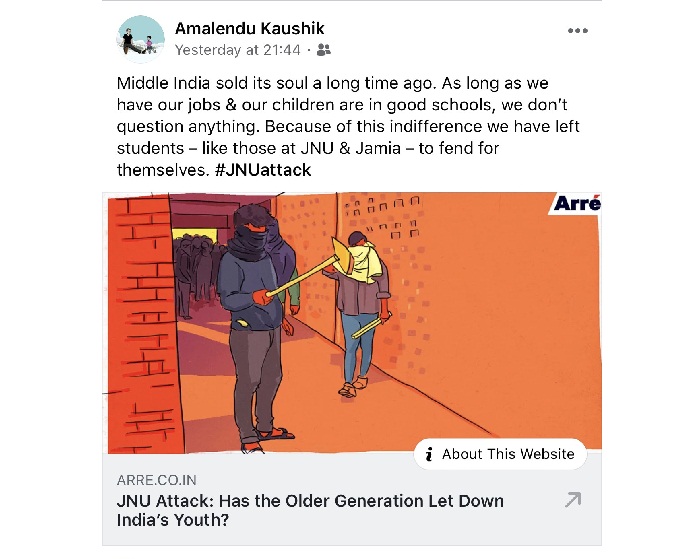 These are tough times. But these tough times give birth to revolutions, leaders, people with spine who aren’t afraid to point out what’s wrong and no matter what stand by truth and justice. Kudos to these creative minds for picking a side!