The TE Rig will give a glimpse to people across India of all the electronic and tech products that are testimony of Taiwan’s popularity. On Thursday, 19 July the gaming rig was flagged off from Mumbai’s Infiniti Mall by Taipei World Trade Centre liaison office, Mumbai director Alex Pen. The vehicle will visit different parts of the country to give people a first-hand experience of the exciting world of ICT, gaming and home & living latest products through 59 locations in India, covering over 11 states before returning to Mumbai.

TE Rig comes ahead of Taiwan Excellence’s annual gaming event Taiwan Excellence Gaming Cup (TEGC) that kick starts on 16 July with elimination rounds for the pan India championship in six cities including Chennai, Hyderabad, Bangalore, Mumbai, Delhi and Kolkata. TEGC 2018 will offer a versatile collection of games including PubG along with DOTA 2 and CS:GO. The grand finale will take place in Mumbai on 19 and 20 October , which will see a total of eight CS:GO teams and eight DOTA 2 teams.

This year, Taiwan Excellence will also give the finale winners of DOTA 2 and CS:GO the golden opportunity to fly to Taiwan.

By participating in TEGC, gamers get a chance to experience the best of gaming technology. It is considered a major stepping-stone for professional gamers who can then go on to participate in international gaming tournaments. This year, TEGC will challenge gamers to battle it out for the most coveted cup and winners will take home a cumulative cash prize of Rs 10 Lakh. Leading Taiwanese brands like ACER, Adata, ASUS, Avermedia, CoolerMaster, DLink, Gigabyte, Inwin, MSI, Silicon Power, Team Group, Thermaltake, Tokuyo, Transcend and Zowie will be showcasing their gaming products during the finale at Mumbai.

Speaking to AnimationXpress, the director explained that they have been receiving a good response from not just the gamers, but the general milieu who have visited the TE Rig or the booths during the finale at Infiniti Mall. Hence the number of cities that the RIG will travel has been increased. He further stated that they they have added one new game this year, which is Player Unknown’s Battlegrounds.

According to the TE team , the possibility of adding a mobile title into the tournament is not in talks currently, but they might consider it in the near future

Speaking on the event Pen said, “We want to give people first-hand experience of all the superlative technological products, technology and accessories that are the hallmark of Taiwan. So, we came up with the idea of TE Rig touring different cities across India to give people a glimpse of the amazing technology from Taiwan. We are sure people are going to have a fabulous time trying out the products and experiencing the best of technology.” 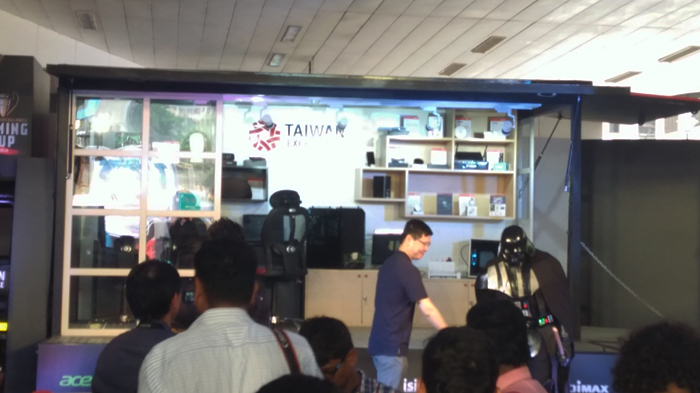 Along with TEGC and TE Rig, Taiwan Excellence’s upcoming pop up booths are also to be likely the talk of the town. Ranging from the latest ICT to Home & Living products, the TE Pop Up booth will enable people to experience superlative technology from the world’s best TE brands right at their neighborhood mall. To start with, the first TE Pop Up booth will be put up from 20 July to 2 August at Infiniti Mall Malad in Mumbai followed with Season’s Mall, Pune, from 10 August to 23 August at and lastly from 5 October to 18 October at Bangalore’s Forum Mall.