With each passing year, newly launched superheroes are becoming an integral part of our lives. Everyone has preferences when it comes to choosing the most-liked superhero, and the freedom to dislike those who are less pleasing. Sometimes, the liked superheroes take a backseat due to the newly developed liking for the latest superheroes. It is similar to when a new toy or a new piece of clothing takes away the charm of your favourite outfit, the one that was the most loved and worn. Similarly, a new superhero can take away the place of your old superhero, and you stop and even forget about its existence over a period of time. But, what about those superheroes who appears to be never heard about after years of its existence? These superheroes are those who didn’t make a name in the world of imaginative characters. Reasons can be various, but the outcome is the same—they disappear from the face of the Earth. And then there are superheroes who are well-liked and recognized, but never saw the light of the present. Those superheroes are still missed by the fans, and expectations keep on surfacing for their revival either in the comic form or animated series.

Such superheroes who earned the place in our hearts, but ultimately failed to survive for long: 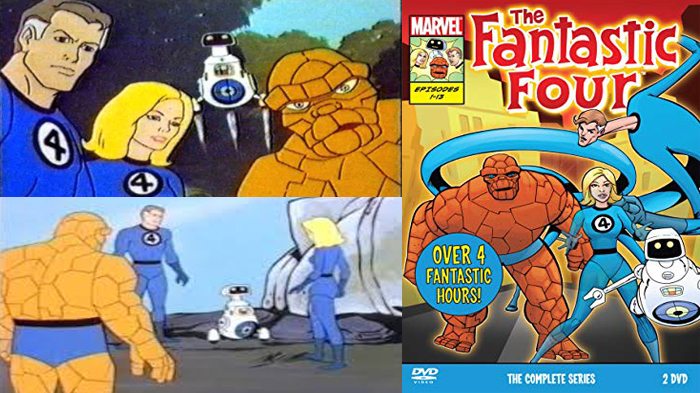 In 1978, when Fantastic Four was made into an animated series, the use of the character of the Human Torch was not feasible as the character had been optioned separately at that time to be used in a solo movie, which sadly never materialised into a reality. Another myth that backed the decision to not include the Human Torch in the Fantastic Team was that children might copy and try to set themselves on fire to become like their favourite superhero (Doesn’t it sound lame?). To fill the space of the fourth character in the team, Stan Lee came up with an idea to develop a cute robot sidekick and Jack Kirby commissioned the design. It is Mr. Fantastic who created H.E.R.B.I.E with means to take its assistance to speed up their calculations. After establishing its foot in cartoon series, the little robot found its way into comic books too.

In one of the famous stories about H.E.R.B.I.E, it aided the other Fantastic Four in their space mission to find Galactus. It saves their spaceship from getting stolen by a pirate group and helps with locating a replacement for Heralds of Galactus. As within the Marvel Universe, H.E.R.B.I.E’s physical appearance was explained as being based on the animated series which in-turn was used with little modifications in the comic. 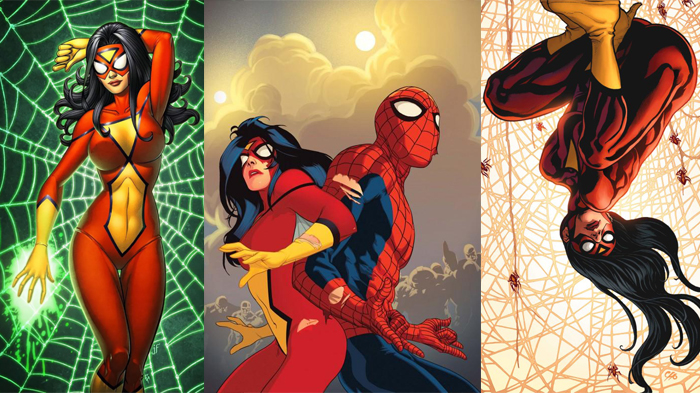 In 1977, Spider-Woman made her first appearance in Marvel Spotlight #32. Her popularity was short-lived in the 1970s and gradually she disappeared from the cartoon series and comic books. Her comic series Spider-Woman lasted for 50 issues until 1983 and the cartoon series till 1979. After which she gave glimpsed appearances for many years until a revival was announced in the early years of the 2000s. Her comeback as a member of the New Avengers and then the full Avengers team was announced but wasn’t successful.

Jessica Drew, the human side of the superhero, was transformed into a superwoman when she was injected with an untested serum containing the DNA of several spider species. Little Jessica took on this DNA which gave her the spider powers. In Marvel’s reality, she is in no way related to Spider-Man or known to be limited to spider-like powers. Under mysteries circumstances, her parents disappear leaving her to be raised by a woman. Once grown, she was recruited by HYDRA under the false pretense of it being a force for good in the world. That’s where she receives her skills for martial arts and techniques to effectively use her powers to become a deadly assassin. So starts her journey of both self-discovery and heroism. During Civil War, Jessica was arrested and interrogated by S.H.I.E.L.D. After which she proceeds to burn HYDRA’s facilities down and joins Captain America and his Secret Avengers. She was also invited by Wolverine to join the New Avengers after the aftermath of Secret Invasion. Later, she was approached by Abigail Brand to join S.W.O.R.D.

Moving out of the 2014 Spider-Verse event, Jessica had a fifth volume on Spider-Woman series which was interrupted by Marvel’s 2015 Secret Wars event, thus ended with a new issue #10. Volume 6 issue #1 was launched which continued the story from the previous volume. Despite the exposure, Spider-Woman did not receive the superabundant appreciation as her counterparts have received, especially the Spider-Man. 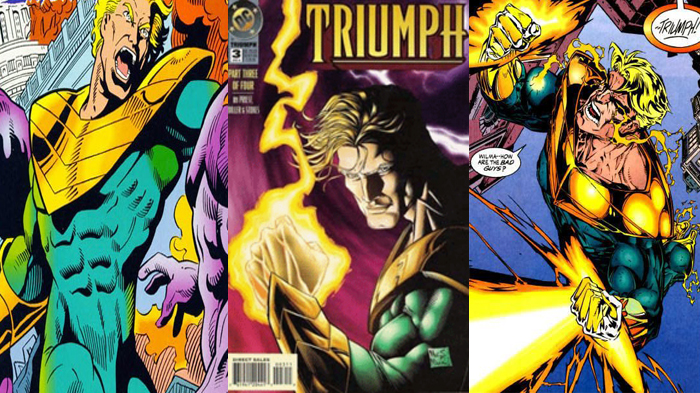 Triumph made his first appearance in DC Comics’ Justice League America #91 in 1994. The superhero was represented as a hot-headed, arrogant, and self-righteous person who lived with a constant feeling of being “denied his destiny” to become one of Earth’s greatest heroes.

Originally a member of Justice League, Triumph is a super-hero with the ability to control electromagnetic fields. His very first mission required him to make a sacrifice that would wipe his existence out of everyone’s memory. After years, he returns through a time rift during Zero Hour, but Justice League doesn’t recognize him and doesn’t accept him. Later, he joins Justice League Task Force.

It’s not a widespread word that Triumph had a son named Jonathan, but its true. The revelation was made several years after Triumph’s death and Jonathan’s existence was questioned. He was a disturbed teenager who received his superpowers due to a nuclear reactor. He ran rampage and killed 19 people including his own girlfriend before being confronted by Supergirl and Raven of the Teen Titans. After using Raven’s power to enter his mind, it is learned that he was driven crazy due to the frustrated visions of Triumph’s removal from the history. Conjuring an image of Triumph, Raven had convinced Jonathan to stop his actions. Jonathan then gets disappeared in a blinding flash of light and is never heard again, so is Triumph.

Additionally, Triumph never found his way into an animation series. 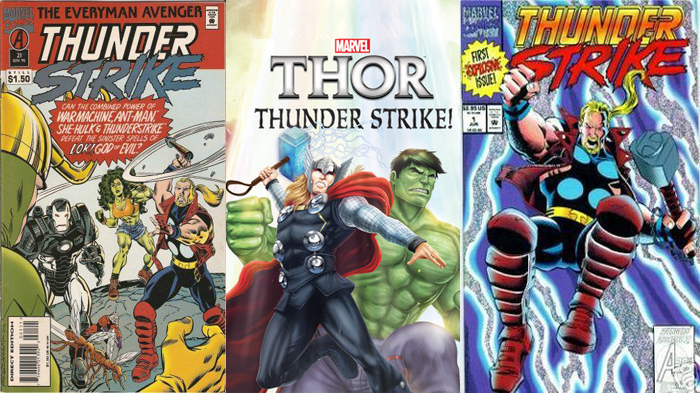 Initially, the character, Eric Masterson, appeared as Thor and later Thunderstrike. Soon enough, it was introduced as a supporting character in the Thor title but continued to appear in several other comic books. It happened following the events of Thor #459 starting in June 1993. Eric Masterson first appeared in Thor #391, as a supporting character. He has also appeared solely in his self-titled series Thunderstrike in 1993. The character was also featured in the Avengers from issue #343 until issue #374.

During his time when he was magically merged with Thor, he aided Avengers in battles such as the Kree/Shi’ar war and the infinity Gauntlet crises. But, Eric’s role as Thor is relatively brief, thus Odin creates a new mace for Eric called Thunderstrike.

While in video games, Thunderstrike has made a cameo appearance as a non-playable character with the rest of the Avengers at the end of Spider-Man and Venom: Maximum Carnage. It also appears as a playable character in the arcade fighting game Avengers in Galactic Storm and in the 2015 game Lego Marvel’s Avengers.

Popular liner quoted by Thunderstrike: “No one dies tonight! Not if I can help it!” Now that Thunderstrike is nowhere to be seen, which is equivalent to be dead in the real world, what should we make out of this byline? 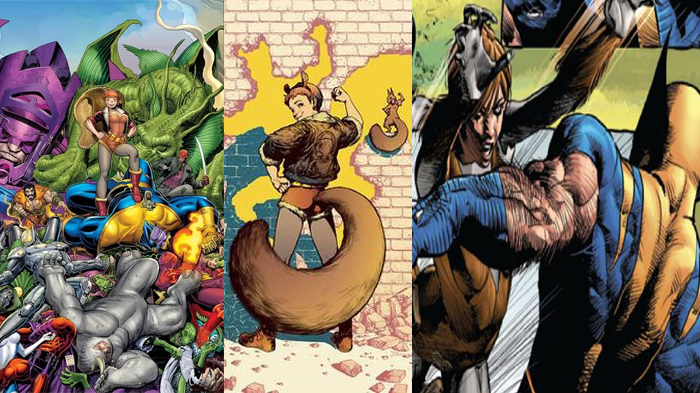 A hero with squirrel-like abilities and features has defeated many of the Marvel universe’s greatest villains. Squirrel Girl first appeared in Marvel Super-Heroes Vol.2 issue 8 in 1992. She started working more significantly as a superhero when she joined a group of superheroes who called themselves the New Avengers—a group led by former New Mutant Roberto DaCosta (Sunspot). In the beginning, she tried to become the sidekick for Iron Man, but eventually became a legendary icon herself with superhuman powers. She is known for her romantic affair with Wolverine and his defeat in a one-on-one combat. She has also defeated some popular and powerful supervillains like M.O.D.O.K, Kraven the Hunter, Deadpool, Thanos, and Galactus! (Isn’t it hard to believe? Yes, it’s true.)

Squirrel Girl had a small cameo in the 2006 Fantastic Four cartoon episode The Cure, but she was comically rejected for the position after her entry. She has also appeared in The Next Iron Spider where she takes Juggernaut down, later revealing the truth to be otherwise—he was actually pretending to be asleep to avoid further beatings. She also has a video game named as Marvel Super Hero Squad: Comic Combat and a playable character in a Facebook game.

Though she mildly disappeared for a short while, her comeback is highly anticipated. She is expected to appear in 2018’s Marvel Rising which will feature Ms. Marvel, Patriot, Ghost-Spider (a.k.a. Spider-Gwen), and Quake alongside her. How fairly she delivers her performance and breaks in the hearts of people will be worth the watch!

The list will go on as our industry has never stopped developing new characters and experimenting with new imaginations. Some characters return and some may never, the power lies with the fans and they can bring a dead character back to life. If we sit to list them all, this article will run too long, thus keeping it short with these five characters which created a fan-base in their days, but failed to survive the competition.