Since the beginning of the NBA season in December, a 22-year-old illustrator from Edison, New Jersey, Dhwani Saraiya, has quickly become a legend among Philly sports fans with her project to draw a new comic book cover for every Sixers win this year.

Saraiya started out drawing superheroes from her collection of old comics. Around her sophomore year of college, she fell in love with the Sixers. Her favorite player is Ben Simmons.

“When I made his comic, The Peacemaker, the first one, he actually saw it and responded, ‘this is dope,’” Saraiya said, “and I lost my mind.”
“It’s kind of insane to see how much it’s blown up,” said Saraiya. who shares her work on her Instagram and Twitter pages, as well as on the Sixers subreddit.

After each Sixers victory, Saraiya will pull up a Getty Images photo, or something the team tweets out, to use as a reference. Most covers take her anywhere from two to four days to complete. She uploads her reference picture to Photoshop. “I usually try to find a picture that reflects the biggest moment within the game,” Saraiya said, adding that now fans often send her requests and suggestions. 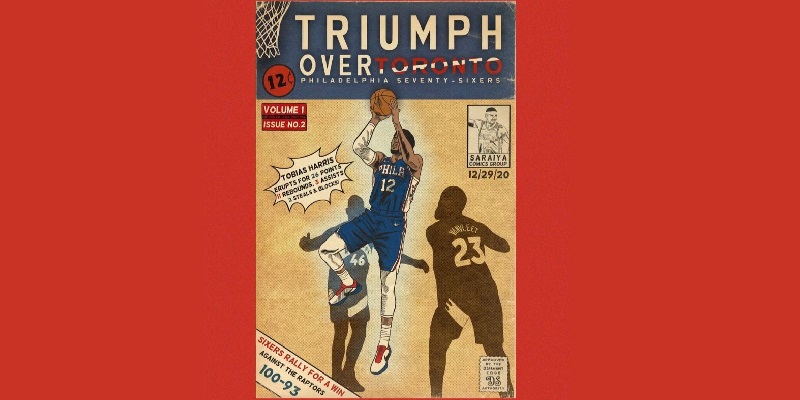 Then she recreates them using gridlines to help her. The drawings are done on her iPad using Procreate. “I really want to get into creative content for a sports team,” Saraiya said. “I think that’s the direction that I really want to head towards.”

Saraiya has an Etsy shop and Redbubble shop where she sells her illustrations.