TELETOON at Night kicks off its fall season with the North American broadcast premiere of The Awesomes. From the comedic minds of Emmy Award winners Seth Meyers and Mike Shoemaker (Late Night with Seth Meyers), the series chronicles the misadventures of a timid and unassuming character named Prock (voiced by Meyers), who is tasked with recruiting and leading the greatest superhero team in the world after his famous superhero father, Mr. Awesome, retires. 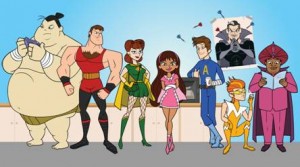 Voiced by the comedy world’s leading talents, The Awesomes introduces Prock’s newly formed group of not-so-super heroes who strive to save the world. Season 1 of The Awesomes begins Thursday, 4 September at 9:30 pm. ET/PT on TELETOON at Night following the season premiere of American Dad.

“We are excited to host the North American broadcast premiere of The Awesomes on TELETOON at Night,” said TELETOON director – programming Katie Wilson.” This series delivers on outstanding comedic writing, strong yet hilariously-flawed characters and an all-star team of voice talent that will resonate with our audience.”

For 60 years The Awesomes has been America’s favourite super team. When founding hero Mr. Awesome retires, and all the strongest members quit the team, his son Professor Doctor Awesome aka Prock is left in charge. Can he rebuild the supergroup and restore the former glory of the family business? Prock and his team will take viewers on a comedic adventure as they battle the onslaught of negative public opinion and the evil Dr. Malocchio (voiced by Bill Hader).

Through the thrills of comic book storytelling with irreverent and inspired comedy, The Awesomes is executive produced by Seth Meyers, Mike Shoemaker, and Broadway Video. The series assembles an A-list team to voice the characters that includes Rashida Jones (Parks and Recreation), Ike Barinhotlz (The Mindy Project) and Saturday Night Live’s most notable cast and alumni, Kenan Thompson, Bill Hader, Taran Killam, Bobby Moynihan, Josh Meyers and more. The Awesomes is a Hulu Original, which made its debut on the streaming service last year and Season 2 premiered this week on Hulu in the US.