Riot Games has recently launched esports stadium ‘LoL PARK’ which is named after their flagship game League of Legends, to promote their game. LoL PARK which is located at Jongno-gu, Seoul, South Korea can house up to 500 people with its immense size.

The specialty of the LoL PARK is not limited to esports section rather it has a section in the form of a round open booth. Here, players are able to sit and play in the center whilst the spectators can watch the players live.

As the audience’s seats are in close proximity with the stage, the audience will able to watch the player’s individual screen. Apart from that, there is an incredibly large screen located at the top of the stage, which offers full picture quality from a multitude of angles, allowing the audience to watch the game without the slightest issue. The screen allows quality entertainment regardless of being at the front or back of the stage. 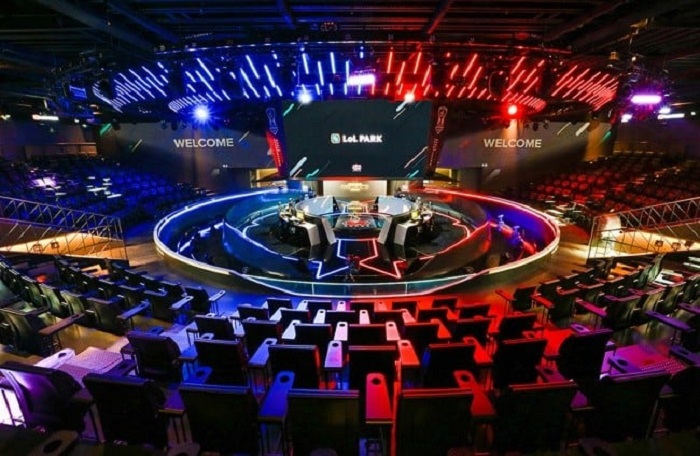 There is a separate box dedicated to the coaching staff, which is located on the outskirts of the stage. This box is clearly visible to the audience and adds yet another perk to the experience. After each game, the players are provided with a joint coverage area or interview zone in which they can interact in new ways with their fans. The LoL PARK has a dedicated fan meeting zone inside the facility.

The 100 seat Riot PC bang (Korean internet cafe), Riot Store, and Café Bilgewater that is so spectacular that it can make even those who are not interested in League to enjoy the venue. Another feature is the LCK exhibition zone. Alongside its immense size and detail, this zone includes League statues, LCK team uniforms, and 3D figures. 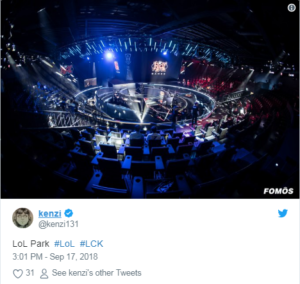 In the player waiting rooms, space had pcs for practice purposes with a handful of comfortable couches and even a whiteboard for propagating strategies. With talent rooms for commentators and make-up rooms placed in unison, one could see how an important League match could be held in a facility like this. In the MCR, the most important aspect of broadcasting, there was the use of more expensive equipment than any other broadcasting station.

Riot Games Korea, representative Lee Seung Hyun, commented, “The League focused stadium is more of an arena-style than a studio. I have made sure and prepared for this place to be a pleasant space for players. In addition, I did my best to set up various attractions and comfortable facilities for the audience who might visit here.”

Lee Seung Hyun, the representative of Riot Games Korea Riot plans to open all facilities by 2019. The LoL PARK has already garnered a lot of interest with the various exhibition centers, fan meets and PC Bang available at the venue. It will go for a soft opening at the upcoming Playing Stage in October. The PC Bang will open in a few weeks time during September 2018.