The nightmare of Jean Grey that haunted her since childhood took a daunting form of reality in the last instalment prequel of the X-Men franchise, X-Men: Dark Phoenix that running in the theatres from today. After the cinematic ending of Avengers franchise with Avengers: Endgame, it is time for X-Men from the Marvel Cinematic Saga call off the curtains in what is being pegged as the culmination of 20 years of X-Men saga. The X-Men: Dark Phoenix concluded with the anticlimactic end.

Earlier in the X-Men: Apocalypse it was shown that Jean was born telekinetic and telepathic power which was building slowly inside her head. In X-Men: Dark Phoenix when a solar flare hits Jean Grey in the space during a rescue mission, it has nearly killed her however she absorbs all the kinetic energy present in the cosmic flare within.

Once she returns home, this force not only makes her infinitely more powerful but far more unstable to control her own powers. The space action against the solar flare in the movie is visually alluring with an almost accurate cinematic interpretation of the solar system and a CGI version of the malfunctioned space station. The movie revolves around Jean Grey from the time of her first death and resurrection as Phoenix to the transformation of her second suicidal death, although not her last as she returns in the X-men The Last Stand. The movie exposes Jean Grey’s alter-ego and the outburst of her telepathic power which she possessed for years as  Xavier kept erecting psychic shields in Jean’s mind to prevent her from using her telepathic powers until she was mature enough to control them. However, this mental manipulation has caused Phoenix to go insane and become Dark Phoenix. The movie takes an emotional turn when Jean deals with the heartbreak of discovering that she was in fact coldly abandoned by her own father after which Charles Xavier inducts her into the X-men fold, raising her like a daughter and telepathically blocking out her traumatic trigger points in her memory shafts 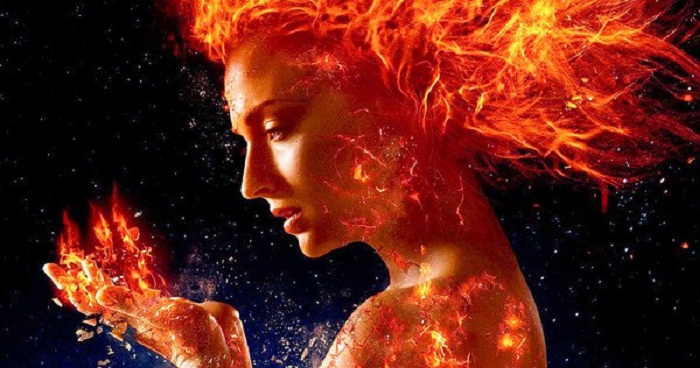 What makes for a spectacular visual is the time X-men attempt to contain Jean and prevent her from going rogue. The confrontation depicts a sequence where flying objects and debris is frozen into time with every object floating in the air and leveraged to mount and go for the attack. Mayhem in the New York street is an absolute VFX treat to watch with the way characters disrupt the ordinary lives of New Yorkers to grapple with the situation. Magneto clan vs Xavier clan pitted against each other over Jean’s culpability question and later joining hands against the real extra-terrestrial villain that originally stirred up the negative force. Face-off in the running train sees a reaffirming unity amongst mutants who had previously been known as rivals against the common enemy.