WildBrain and Alpha Group, developers of animation and toys, announced that their original CGI-animated preschool series Rev & Roll has been picked up by over 40 broadcasters and streaming platforms in more than 25 territories around the world. A global toy program from Alpha has rolled out in China and is planned for additional territories. WildBrain Spark is set to amplify the brand even further with brand new stop-motion and toy-play original content videos.

Rev & Roll follows the adventures of a group of high-energy friends led by eight-year-old Rev and his best friend, Rumble—a rambunctious, powerful truck with a puppy personality—in the town of Fender Bend, where everyone has a four-wheeled buddy at their side. 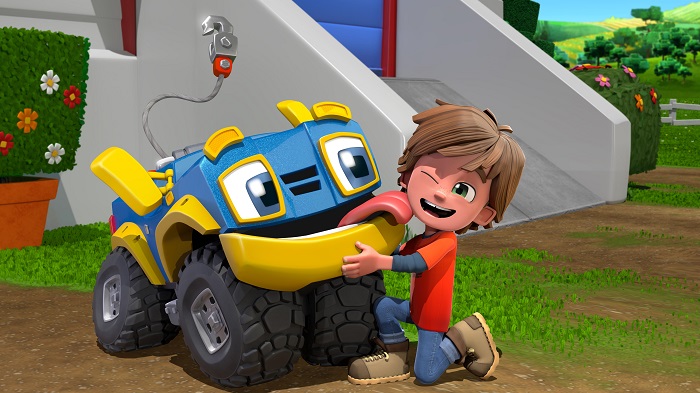 “The response to Rev & Roll from broadcasters and streamers across the globe has been outstanding,” said WildBrain president Josh Scherba. “This is a fantastic series for kids, filled with adventure, friendship and fun, and we’re thrilled it’s rolling out in so many territories. Bolstered by its strong performance on our WildBrain Spark YouTube network, we think Rev & Roll has excellent potential as a global brand, and we’re equally excited about the toy program rolling out from Alpha Group.”

Alpha Group president Robert He said, “Rev & Roll is a wonderful show with expressive characters, dynamic story-telling and strong curriculum goals. We believe kids and parents will love it.”

Rev & Roll is also popular on AVOD platforms such as YouTube, YouTube Kids, Tubi, Pluto TV, XUMO, Ketchup TV, Crackle and The Roku Channel, where the property has been watched by kids and families in diverse territories such as the US, Brazil, the UK, Australia and Canada. Season one of Rev and Roll is now also available on Prime Video in the US, Canada and the UK via Prime Video Direct, Amazon’s self-distribution service for content providers.