Latest News
PUBG Mobile Club Open Fall Split 2019 tournament has announced the schedule for South Asia play-ins and the countries that will be participating in the tournament. Qualifying teams for the year’s biggest mobile esports event, PUBG Mobile Club Open have been revealed and it is time for the South East Asian round to begin. Top 24 teams of PUBG Mobile from South Asia Region will face each other and will give it their all to earn a Road to Finale tickets.
Out of the 24 teams, 16 teams will qualify for the Regional Finals of PMCO Fall Split 2019, which begins on 7 November. The top 16 teams will compete for a total prize pool of $175,000. The winning team will represent their country at the Global Finals in Kuala Lumpur and have a chance to play for the trophy and a prize pool of $2.5 million.The teams will be divided into three groups of eight players each. A total of six matches will be played on Day 1 in third-person perspective. 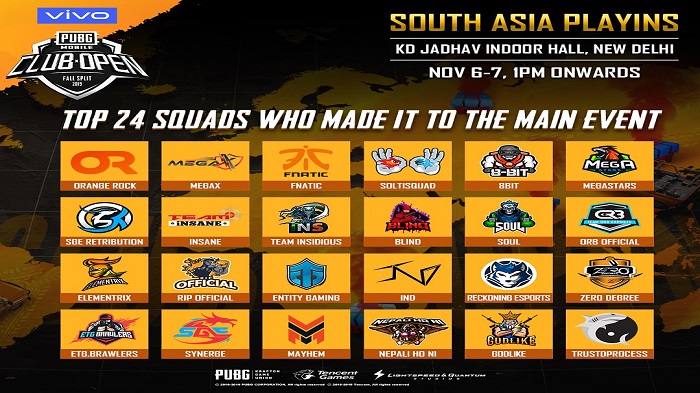 The first match begunat 1.00 PM and Day 1 will go on until 8.00 PM. Best PUBG Mobile teams from India, Nepal, Pakistan, and Bangladesh will be participating in the tournament. Some of the Indian teams include team Orange Rock, Soul, and IND. Those who want to watch the tournament live and cheer for their favourite team can visit the KD Jadhav Indoor Hall in Delhi, India, and the entry ticket is free. Besides this, VIP passes are also available that can be purchased online. Those who can’t reach the spot can watch the live-action on PUBG Mobile Esports YouTube channel. The show has begun today, and it will be a five-day event. The winner will proceed to the Global Finals that will be played in Malaysia.