Last year, one of India’s noted animation personalities, Arnab Chaudhuri passed away. He was noted for his work across sectors in the industry and especially lauded for his work  in Arjun,  The Warrior Prince made by UTV , was released in 2012 as a Disney film.

Now, Promax India has decided to honour him with an award named after the animation maestro. In the upcoming edition of the awards, the “Rising Animation Talent” award has been renamed to the “Arnab Chaudhuri Award”. 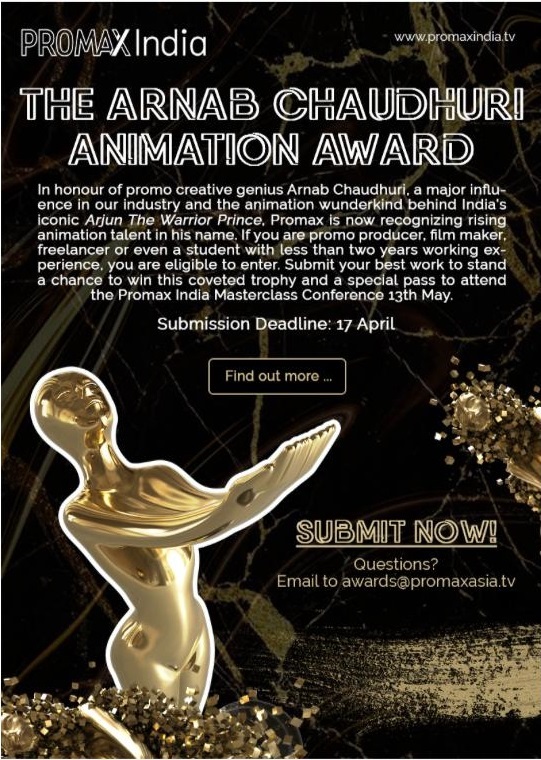 At Turner, he held the position of senior creative for South Asia – Cartoon Network and Pogo. He helped create Turner’s first pre-school block in the region, Tiny TV, which was an instant hit.  Then, in late 2003, the team was apparently given 90 days to create and launch a totally new kids channel for India which required them to find a name and create an identity from the ground up.  The result was Pogo, which launched on 1 January, 2004.

Orion Ross was then the regional creative director for Turner Entertainment Networks Asia Pacific. He shares, “Arnab mocked up a logo animation early in the process to show everyone how it would work—nobody in management really understood the name until they saw it, but afterwards they were totally convinced.  Arnab directed a live action shoot to create the launch promos and channel branding, with real kids shouting, bouncing, flying and being covered in paint.  They loved every minute of it, because Arnab treated them all like his family and brought so much love to the set.  I think we won 17 Promax awards year.”

Apart from that had has worked with organisations like Disney and Channel [V].

The director passed away in December last year and the industry was in for a shock. Condolences and fond memories were shared by the industry veterans in huge numbers while appreciating the creative genius he was.