After a gap for quite a while, Wacky Races started airing on POGO in Wacky POGO in August 2017. In a overview interview, the producer of the show, Mike Disa, opens up on the re-launch of the show and what is there in store for us. What’s new and what’s still there?  Find out! 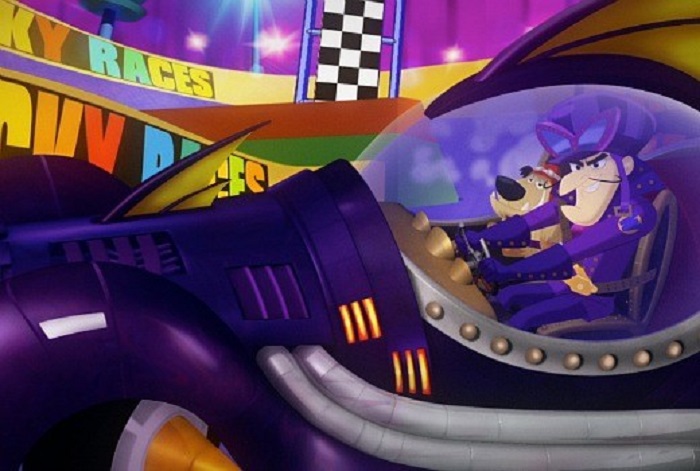 What inspired you to bring back “Wacky Races”?

I had done feature films for Warner Bros. in the past and am very close with several of the creative showrunners there – Jeff Siergey being one. He and I are dear friends and made many movies together.

When he heard they were doing something for Wacky Races, he called me up and said you ought to come in and talk to them about this because you’ve probably got the right amount of “wackiness” to pull this off!

So I came in and I sat down with the creative execs – Jay Bastian – and we had a very casual, very fun conversation where we just threw around a lot of jokes about metafiction and making fun of media, and basing a show that’s all over the world and making fun of how terrible American tourists are whenever they travel – and they liked the idea and so they just had me go off and reconceive the show as something a little bit different than it originally was, but still mostly about action.

What elements did you keep from the original series and what are you bringing to the table with this reboot?

The things we kept were the things everybody recognises from the original show. So the music obviously, some of the best cartoon music I’ve ever heard. I mean honestly the Wacky Races’ score is the best 1960s or 1970s music put on TV. I think it’s one of the best things ever.

So we definitely wanted to keep that. And we wanted to keep the characters familiar, even though we updated them obviously. So you look at Dick Dastardly you know he’s Dick Dastardly, you look at Mutley you know he’s Mutley, and Penelope Pitstop and all the same. Characters like Penelope and Peter Perfect and Dastardly and Mutley were absolute no-brainers – they had to be in the show.

There are some changes, one of which is, and there’s nothing we can do about it, that Hanna Barbera doesn’t own the rights to all the characters from the original show. So I couldn’t use the characters we didn’t have the rights to yet. But, I have a scoop for you – in the last couple of days I’ve been informed that we do now have the rights to The Anthill Mob, so I will be writing a show in the next week that brings them back into Wacky Races.

They’re funny and I’m looking forward to it…and it’s a lot of characters so that will be fun to do. But the fact of the matter is we just didn’t own all of the original characters, and instead of trying to do sad imitations we said let’s just work with the smaller cast and see if we can grow it as it goes and that’s what we’ve done.

How many characters are there in total right now?

Well, there are seven regulars and five recurring, and so far we’re up to 44 guest villains and racers. They go all around the world and meet different people wherever they go, so every episode has a different cast.

The original show is from the 1960s – can you tell us about some of the modifications you’ve made in order to make it attractive for the current generation and the challenges you faced with that?

The cars themselves and all the action scenes in the show are all shot in full state-of-the-art computer-graphic CG. So it is a very dynamic, very exciting show in how it is shot and how the racing works. So you’ve got a show that looks a little bit like a video game when the camera starts to move around – or like a Fast and the Furious movie.

So you’ve got feature quality CG and that kind of action all over it, and so the challenge was to make the Hanna Barbera characters work in that world and still bring the sense of classic WB, slapstick, silliness and absurdity and weirdness to the show and make the CG all work with that. We’ve got a great CG studio working with us and those cars turned into little characters… they can morph and stretch around and move in different ways, they’ve got special attachments and they turn into planes and submarines and hot air balloons and spaceships.

It became a real advantage as we went on that we had all that extra technology and flexibility and storytelling because we can set stories now on other planets, in other times and worlds and dimensions, and we do a lot of that, so there’s a sci-fi quality to the show that was inspired by the idea of doing these high-tech CG cars.

What do you think is keeping a child’s attention especially in this era of streaming and on-demand media consumption?

Slapstick humour. Big visual funny classic slapstick humour. We don’t do anything that’s inappropriate for family viewing but I’m a big fan of classic MGM, classic Bugs Bunny, classic comedy. The show is very fast-paced and it’s got a lot of explosions and sight gags and people turning into different things. It’s a very cartoony very visual, very action show – but action in a good way, in a very kid-friendly way.

Do you think action is Wacky Races most distinctive feature?

No, but the wackiness is. When you’re trying to keep kids’ attention, you just don’t want cars turning left the whole time. You want things like car crashes and flying through the air and driving up a mountain, or avalanches and explosions – so there’s lot of cool stuff like that. But the most distinctive feature is that it’s way more about wacky than it is about racing.

Which car would you get into and why?

I would not get into the Mean Machine because it would probably explode! Dick Dastardly does not know how to handle explosives so I would stay out of the Mean Machine. The one that’s probably the most fun to do stuff with is the Turbo Terrific – which is Peter’s car because it’s got a jet engine that unfolds.

How would you encourage guests to watch Wacky Races?

When I reconceived the show, I reconceived it personally as Penelope being the star. Penelope is the action hero of the show and she is the only person who I would call “on the ball”. Peter’s not the brightest bulb and Dastardly obviously has problems, and all the other characters are quirky but it’s really Penelope’s show to me. She is definitely the action hero.

We’ve also introduced her twin sister, Pandora, and we do a lot of shows around Penelope and Pandora. Also Penelope is played by Nicole Parker, who is a Broadway star who plays Elphaba in Wicked. And so we do entire musical episodes and song numbers with her… so she is often the star of the show and we have music and action with her and so she is the whole package. She is the superhero, action star, race car driver, singer, songwriter, movie star. So she’s the hero for sure… she’s my favourite.

Are there other Hanna Barbera reboots?

Well there’s an interesting thing about this show – they gave us not just the Wacky Racers for this show but they gave us the whole Hanna Barbera library to play with. So about 50% of the episodes you’re going to see classic, old HB characters come in, sometimes in major parts.

We just finished a Hong Kong Phooey episode that could very well work as a pilot for a new show for him. We brought back Winnie Witch, Huckleberry Hound and Snagglepuss in major roles, so if you watch our show you’re going to see guest stars from Hanna Barbera – they’re all over the place – and I hope they do spin off in their own series.