PFW provided 410 VFX shots for Kingsman, about half the shots in the movie, across three main sequences: the ‘Roxy Balloon’ sequence, the series of chaotic fights at the end of the movie, and of course the much-lauded ‘Church Fight’, that sees Colin Firth take on a Westboro-style church congregation. In addition to these main sequences, PFW also delivered a number of smaller sequences and one-off shots, including the underwater sequence in the dormitory, shots of the White House and Valentine’s pad, and lots of monitor inserts and table graphics. The ‘Church Fight’ was the biggest sequence that PFW delivered, and PFW VFX Supervisor Marc Jouveneau was called in to supervise the shoot. The decision was made early on to shoot the sequence with a 45 degree shutter angle in order to get the sharp, crisp, choppy look that the director wanted.

“The entire sequence was fully prevised prior to the shoot, and was very precisely planned,” said Marc. “It was filmed in South London over two or three weeks, and was originally going to be 6 minutes of fighting in one continuous shot.” One of Marc’s main tasks was to ensure that the transition points between takes was seamless so that the sequence could be edited to appear to be one continuous shot – despite the fact that the action was being shot on hand-held cameras. The other main challenge of the sequence was a number of tricky face-replacements. “Colin Firth couldn’t be expected to do some of the stunts that were required in this sequence, so we had some challenging face replacement work to do,” explained Marc. “Some of the shots were close-up, with the face filling the screen. That was a challenge!” 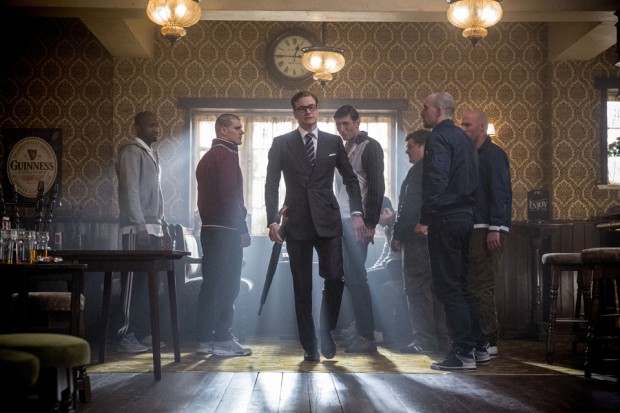 This sequence also set the look of the action in the film, which the director wanted to be bloody and violent but also funny and cartoonish. The team spent a lot of time finding the right look for the blood elements, finding ways to treat it so that it wasn’t too gory. “Of course the blood is not designed to look realistic… that would have been awful!” said Marc. “It is ‘Matthew Vaughn’ style blood – fast moving and misty.” Another of PFW’s main sequences was the ‘Roxy Balloon’ sequence, in which Eggsy’s fellow recruit Roxy goes up to near-space altitudes in a special jet-pack chair to take out a satellite. “The balloons were fully CG all the way through – we didn’t shoot any balloons,” said Marc. “Roxy had been shot on blue-screen, but we replaced the missile throughout on the back of the jet-pack chair. We provided a full CG shot of the plane taking off, and lots of FX of Roxy going through the clouds – and when she pops over the clouds and into the sunlight and eventually climbs to a near-space altitude, we see the stars and dark skies. Then we had the missile launch and satellite explosion, and the fall back to Earth. All of this, with the exception of Roxy, was fully CG.”

The team looked at footage shot with GoPro’s from weather balloons for reference in creating the environments, and took visual cues from Felix Baumgartner’s RedBull spacedive for her plummet back to Earth, replacing Roxy with a digi-double for some of the more violent tumbling. The animation of the balloons bursting was based on a simulation and involved lots of detailed FX work from the team. The final main sequence PFW contributed was the series of fights playing out over the globe towards the end of the film. “The fights at the end were great fun,” revealed Marc. “We had sequences in Rio, Westminster in London, a stadium in the US, Toronto – and each one is really funny. We used Massive for the crowd sims and had a lot of fun with them. They are violent – you can really see people going at each other – but it’s over the top cartoon violence, like the rest of the film. The challenge was to find the right balance between humour and violence, which I hope we achieved.”

Kingsman: The Secret Service opened in the UK on 29 January, and releases in the US on 13 February. It tells the story of a super-secret spy organisation that recruits an unrefined but promising street kid into the agency’s ultra-competitive training program just as a global threat emerges from a twisted tech genius.