2019 is going to bid adieu in a few hours and the year has turned out to be quite fascinating for the Indian animation space. From studios to broadcasters to independent animators, all of them have got something to take away.

Over the year, animation has emerged as a powerful tool for telling socially and emotionally moving stories. From LGBTQ to inter-religion romance to cyberpunk dystopia, animation has tapped it all. With the current scenario of agitation over citizenship and questionable leadership in the country, animated short, Gustaakh from Plexus Studio seems to be all the more relevant. 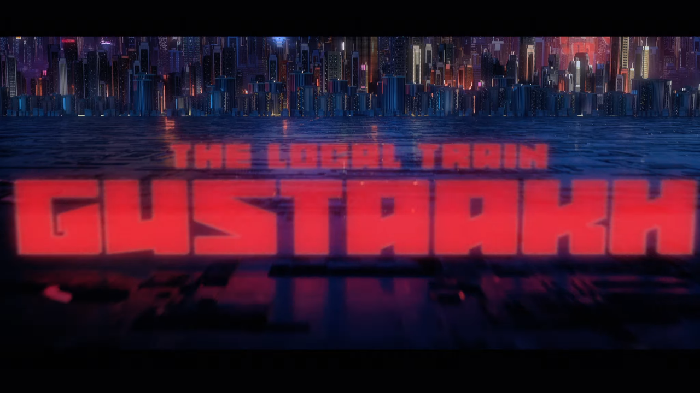 Specialising in VFX, animation and motion design, Plexus is helmed by independent director duo Vijesh Rajan and Yashoda Parthasarathy. Gustaakh is produced by Krish Makhija, part of Mosambi Juice Productions. The Plexus team independently created this music video over the course of around seven to eight months along with some help in funding from the Delhi-based band, The Local Train.

Commented director Rajan, “After Khudi in 2017, which became an instant hit, The Local Train contacted us to make a video for their song ‘Gustaakh’. The lyrics really echoed our political sentiments, speaking about a self-obsessed political leader who was silent in the face of adversity. When we compared that to the international political mirrors, like the Trump victory in USA or the North Korean dictatorship run by Kim Jong Un, we found several parallels. Leaders who had power that was brought to them by publicity and propaganda that blinded their citizens. This is what made us decide that the Gustaakh music video must have a cyberpunk structure. It must exist in a world that looks like it has really progressed in the first impression but as you move in closer, you start seeing the issues that are plaguing it, the social breakdown. We have always been fans of cyberpunk/sci-fi genre and always wanted to create worlds with robots / droid characters. We are also fans of the monster movies from the earlier days of visual effects – where stop motion was used freely in juxtaposition with live footage, which from today’s perspective gives it a very quirky vibe. So we wanted to see what a blend of both would look like and that’s what we arrived at with the final music video. And amidst the blissfully unaware citizens, we find our broken hero someone who doesn’t fit in and because he is broken, he is able to see the issues clearer.” 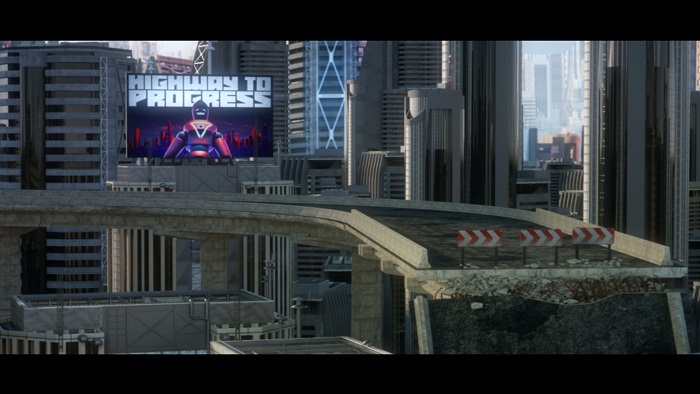 Gustaakh was showcased at Anifest 2019 and got positive response. Lately, in mid December, Plexus released the behind-the-scenes and VFX breakdown of this film.

The team at Plexus got highly inspired by the song and the lyrics and wanted to make a quirky music video which had something important to say, just like the song has poetic and thought provoking Urdu lyrics hidden behind playful punk rock music. After listening to the song they came up with two or three different stories, which they scripted and presented to the band. The Local Train liked two concepts equally, but because of budgetary constraints, they mutually decided to proceed with the current script. Once the script was locked, they did storyboards and animatics for the video to set the pace for the events and actions that happen in the video which helped them in understanding how to take shots, or animate the characters. They then went into a world building process over a couple of weeks.

Rajan added, “We built a miniature city – this included character designs, several meetings with our Art team, look and lighting tests, camera tests, and more. We wanted to know which was the best way to capture both the monster as well as the city in the same frame and wanted the monster to be a real person wearing a suit instead of a fully CG monster. This took around two months in total. Our shoot was completed in a friend’s warehouse in Kandivali, in a week. There we built the entire set out of cardboard and stick figurines. After this, it took some time for the footage to be edited and post produced, because as a two member, studio we were involved in some big projects that kept us out of Mumbai for few months. But eventually we completed it.”

Gustaakh has a mixed media approach as Plexus used stop motion as well as 3D character animation besides CGI, VFX, and motion graphics. For CGI, they used Cinema4d and Octane renderer.

The animation, design, CG and VFX team consisted of only four members including Rajan and Parthasarathy who was the co-Writer and VFX supervisor of this video. Thus, one can well imagine the level of precision, hard work and challenges was there in this project.

Most of the neon signs used in the short, were either free vector graphics which were downloaded from websites like freepik or friends’ and colleagues’ company logos. They also used some fictional brand logos in the video, which eased the world building process and more was spent on detailing the propaganda art like the posters, holograms and billboards. Even their supplementary CG assets like vehicles, building structures and so on were downloaded for free from websites like turbosquid, cgtrader and cgpeers. They even called in favours from friends for modeling TeddyZilla and the hero’s bazooka. 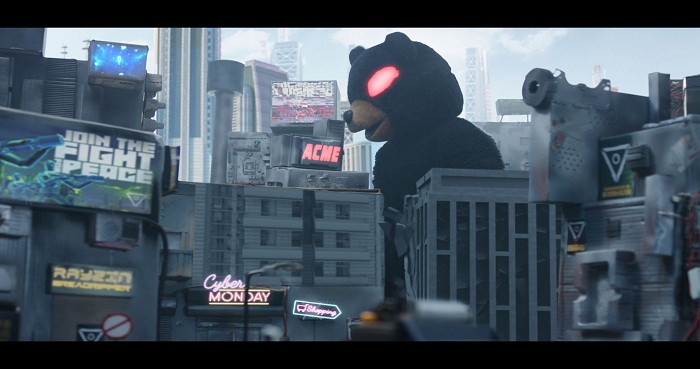 “One of the biggest problems we faced during the shoot was the issue of scale. We had limited time and budgets to make multiple buildings of varying scale. Hence, we had to shoot a lot of the scenes with chroma and decided to take the support of CGI. Another hurdle we faced was during the process of final CG renders, as we couldn’t afford a huge render farm to do our renders. But with some internet research, we learned how to use Octane Network rendering, which we used to juice out all the GPUs we had in our home studio to get the render times down by 80 per cent,” informed he.

The Local Train band was quite supportive of Plexus’ vision of the animated short and they were able to convince them to expand their budget to purchase the Kitbash 3D model cities “NeoTokyo” and “Warzone”, which were used extensively for creating the world that our CG characters were placed in. This gave the whole team very high quality 3D models of futuristic buildings, which wouldn’t have been possible to model from scratch. These models were easily distributed into a cityscape using Octane Scatter – which basically just takes 10 or 20 models and distributes it across a plane to make it look like a massive cityscape with hundreds and thousands of buildings. The scale that was brought into the sequences because of this decision can be clearly seen in the video.

“Since all the characters in the world were meant to look like a mindless drone army of robots, we got away with downloading just one model (of the posing puppet) for it. Since our team didn’t have any character animators at the time, we took the help of Mixamo, where several thousands of hours of motion capture data is available for any Adobe account holder. For the background characters as well as protagonists in key scenes, we got away with using loopable motion capture actions from Mixamo. Again, this saved us a lot of time and money and wouldn’t have been possible a couple of years ago,” mentioned Rajan. 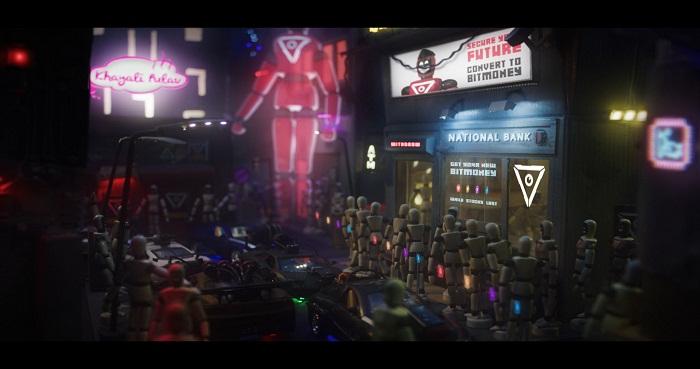 Team Plexus have been big fans of Bladerunner movies, Minority Report, The 5th Element, Ghost in the Shell highly influenced the world building for Gustaakh. What stands out in the animated short is the monster, Teddyzilla.

Rajan noted, “We always knew that the monster would be a guy in a suit, just for the comic effect of it. The original monster we wanted to make was definitely reptilian, like Godzilla maybe – but we were never able to find a suit like that in Mumbai. We asked around and found some costume rental places around Andheri but most of these places only had Hindu mythological costumes. It’s in one of these places that we found this black fur suit and decided that we would use a cute Teddy but just turn its eyes into a glowing red to show that its a vicious monster.”

The role of the monster is pretty important in the video, which depicts the world to be in a constant loop. The characters are blinded by their love of their leader and going about their lives, blissfully ignoring their everyday problems. There is just one person in their midst, our hero – who is frustrated. But just like everyone else, he doesn’t do anything about it. It’s when the monster arrives, and wrecks havoc, that the ‘broken’ hero is set into motion. The monster acts as the catalyst which takes the hero out of his comfort zone and makes him do something for his country and his people. 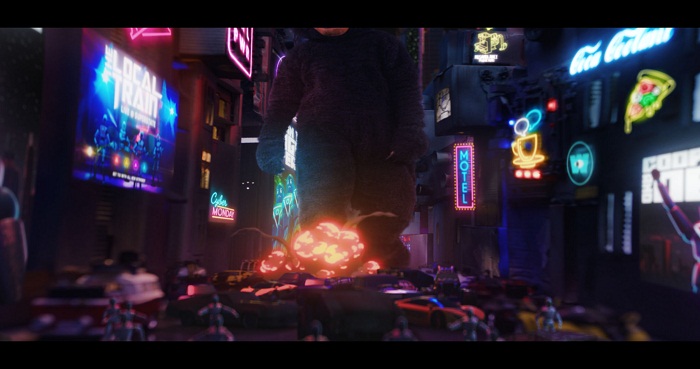 Concluding on the relevance of the theme in Gustaakh and relatability of the Indian audience, Rajan said, “It’s a common misconception that Indian audiences don’t understand sci-fi or high concept films, but they are the biggest audience for filmmakers like Christopher Nolan or the Russo brothers. Clearly, our audiences are ready for good science fiction content, but because of conservative typecasting by producers and bad scripts being okayed, such content does not get made in India too often. This is why we really wanted to push the boundaries and make a video like Gustaakh. The scenario is pretty universal and parallels can be drawn with any society. All famous leaders have their position because of their charisma and charm and all citizens leave their lives in the hands of these leaders and stop questioning their roles in the society to a level that they forget that it was they who gave this power to the leader in the first place. Our story isn’t a dystopia, it’s a world of Utopia with citizens who have taken a backseat believing that there will never be problems in their world.”

This short tells us that there always will be a monster that comes out of nowhere and disrupt normal lives. Hence, sitting back in blind faith should never be an option, but we should constantly be willing to step out of our comfort zones and look at the problems from a different perspective, and most importantly find a solution.