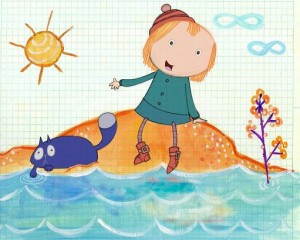 The series follows an adorable spirited little girl, Peg, and her sidekick, Cat, as they encounter unexpected problems that require fun and creative solutions. In order to solve the problems, Peg and her cat must add, subtract and apply basic arithmetic. Their adventures take them to historical far-away lands, art centers in bustling metropolises and the colourful cosmos, all the while demonstrating that it’s never too early to start learning the magic of numbers.

The series originally debuted on PBS Kids in the US in the fall of 2013 and on Treehouse in Canada in March of this year. Peg + Cat has also been licensed by Super RTL (Germany and German-speaking Europe), Canal+ Family (France and French-speaking territories), ABC TV Australia, TVNZ (New Zealand), SVT (Sweden), YLE (Finaland), HOP (Israel), Mini-Mini (Poland), E-Junior (UAE), Zee Learn (India) and Disney (Korea).