The Federation of Indian Fantasy Sports (FIFS), today unveiled the findings of a report titled ‘Business of Fantasy Sports’ in collaboration with KPMG, at the third edition of FIFS GamePlan 2020.  According to the FIFS-KPMG report, online fantasy sports operators’ gross revenues stood at Rs 2,470 crore for FY20 as compared to Rs 920+ crore in FY19 an increase of almost 3X over a period of 12 months.

KPMG India head of media and entertainment and partner Girish Menon added, “Online fantasy sports in India has seen rapid growth, reaching a revenue size of Rs 2,470 crore in FY20. This growth has also contributed immensely to the overall ecosystem around fantasy sports including online payment platforms, tech vendors, data analytics, and more. and has had a positive impact on the consumption and growth of the overall sports landscape in India. While COVID-19 may result in a temporary blip in the upward trajectory of the fantasy sports segment, the medium to long term growth prospects of the segment remain robust, with the gradual return of international sport. Further, in a post COVID world, with social distancing measures in place, fantasy sports is likely to play an increasingly important role in connecting fans to their favourite sports and increasing fan engagement.”

What has been driving the growth of online fantasy sports ?

Here are the factors that are driving the growth of online fantasy sports platform:

Digital Infrastructure – Internet and Smartphone Penetration:
Smartphones have become the primary medium for users to participate in fantasy sports in India. The growth of smartphones in India and mobile broadband internet in tandem, expedited by the launch of Jio’s affordable data plans in 2016 coupled with the launch of smart feature phones by Jio and other players10, have emerged as major enablers for the growth of online fantasy sports in India. Smartphone penetration in India has been growing at ~13 per cent CAGR from 2017 and its user base is expected to reach ~850 million by 2020. While the rural internet penetration has reached 27.5 per cent by Sep-19, the same still has significant scope for growth. The number of broadband internet subscribers in India grew from~482 million in September 2018 to ~625 million in September 2019, and is expected to grow at a CAGR of ~8-10 percent to reach 840 million by 2022.

Increase in digital transactions via Payment wallets and UPI

The increasing user adoption of digital payments and introduction of user-friendly payment modes such as payment wallets and UPI have also contributed to the growth of paid users of OFS in India. The transaction volume on UPI and digital wallets has grown at a CAGR of 469 per cent over FY17-FY19, helping OFS users transact seamlessly on the platforms. 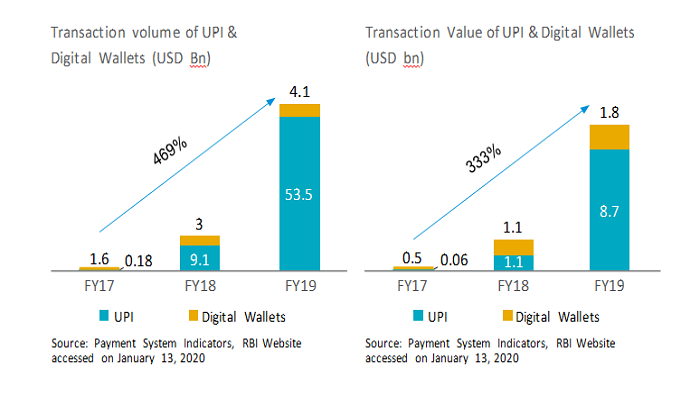 Growing popularity of Sports leagues Historically India has been a Cricket-centric country, and both the core formats (Tests and ODIs) have received strong viewership. The advent of the T20 format, and introduction of Indian Premier League (IPL) in 2008 revamped the sports league landscape in India. IPL follows an innovative city-based franchisee format, which not only pulls people to stadiums to watch their favourite players battle it out, but also unites residents of a city to come together and support their city franchisee and in turn drive viewership across channels. As per Broadcast Audience Research Council (BARC) India, IPL clocked ~462 Million viewers in 2019 on Television and around 300 Million viewers on Hotstar. 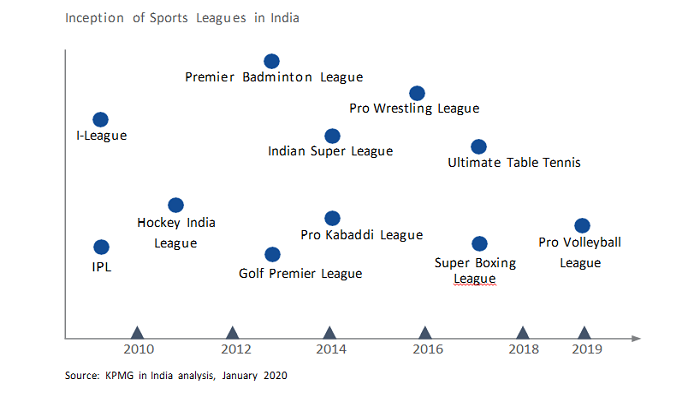 Surge in growth of sponsorship, participation

With sponsor support, participation of international sportsmen, celebrity endorsements and demand of viewers, these new leagues have gained increasing traction, and fantasy sports operators have expanded their offerings to include these leagues in order to ensure continued user engagement on their platforms. In addition to that formalisation of different sports in League format and marketing initiatives by the promoters and broadcasters has increased the popularity of erstwhile recreational and non-mainstream sports among a national audience. While sports like Hockey and Football have been the next most popular after Cricket, the tournaments were mostly regional with select representation of Hockey in Olympics and World Cup. Other sports like Volleyball, Basketball and Kabaddi though omnipresent in the country had never garnered notable traction at a national level. Incorporation of these team-based sports in a league format has increased the mass appeal of these sports. 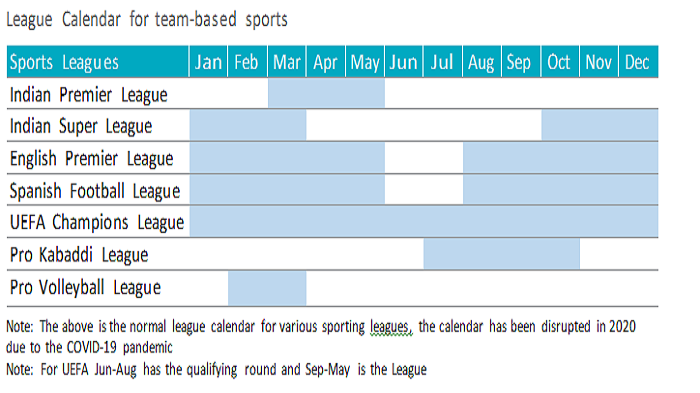 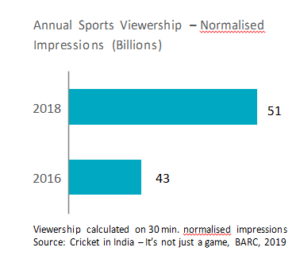 Fantasy Sports operators are leveraging technology to provide a seamless product experience to users through continuous investments in technological innovation and upgradation of the platform, and partnering with technology solution providers, analytics platforms and more. For instance, Dream11 is hosted 100 per cent in the Amazon cloud, giving the operator an infinitely scalable platform to build on.Its backend is built on micro-services architecture backed by distributed computing and in-memory databases to develop infinitely scalable systems. Being highly data-driven, the online fantasy sports operators are investing heavily in data engineering and data sciences infrastructure to run machine learning algorithms at scale to support their product offerings. To enable these tech- advancements at a targeted speed, players like Dream11 and MyTeam11 are moving towards a continuous deployment model,

a completely automated testing framework and technological advancements in partnership with the likes of AWS. These technological investments improve the user engagement on the platform.

The fantasy sports platforms are partnering with content platforms to offer insights and research avenues to users. They are increasingly launching solutions like group chats, clone team features, player statistics, and more to develop meaningful ways for users to engage. For instance, Cricwars is differentiating its offering by introducing an ‘Auction’ format which enables user to build a team by participating in a live auction sale held on the application before the start of every series. This interactive participation increases the user engagement even before the game starts. Users then earn points basis their team’s performance in the entire series, and winner of the fantasy sports contest is decided accordingly 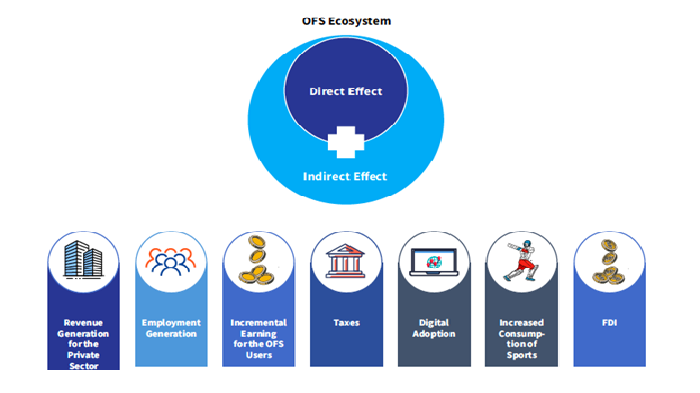 Fantasy sports is legal in India

Talking about the growth of the fantasy sports industry in India in his speech at GamePlan 2020, NITI Aayog, CEO, Amitabh Kant, said, “I have very keenly followed the growth of Indian fantasy sports industry as a supporter of technology and good governance. I am a long term believer that India must become a global champion of the fantasy sports industry. Sports across all facets, including fantasy sports, could well be a game-changer for employment and career opportunities. Given our Government’s initiatives like ‘Digital India’ and ‘Startup India’, I believe that we can harness the power of fantasy sports and create a robust sports ecosystem to boost its growth in the next few years. Post pandemic I am confident that the industry will not just rebound but will lead the way for sustainable technology-enabled growth secured by good governance.”

Commenting on the report findings, FIFS, chairman John Loffhagen, said, “The COVID-19 impacted the Indian online fantasy sports industry in FY21 with sports matches across the globe cancelled to ensure player and staff safety. Specific to India, with IPL getting postponed, ~30-40 per cent of the revenues for most of the online fantasy sports operators were impacted for the quarter. As real-life sports is making a promising return, Indian sports fans are in for a non-stop sporting action for 8-9 months. As most of these matches will be held without an in-stadia audience, we are sure that fantasy sports being a highly immersive fan engagement platform will experience a strong surge in demand by the Indian sports fans.”

Earlier the Gameplan 2020 was scheduled for 5March 2020 by but due to the Covid -19 pandemic the event was postponed. Today, adapting the new normal of digital age, Gameplan 2020 finally went live on an eye-grabbing virtual event envionment.