Chitrabichitra, a cartoon exhibition at the Nepal Art Council, Babarmahal, and Kathmandu commenced on Monday. The exhibition, themed Cartoon exhibition on Education, has on display a total of 55 cartoons, all of which are related to the present condition of the academic system in Nepal. The exhibition features the works of artists like Durga Baral (Batsyayan), Ashokman Singh, Khokana, Abin Shrestha, Basu Kshitiz, Debendra Thumkeli, Keshav Raj Khanal, Umeshchandra Adhikari and Rabindra Manandhar. 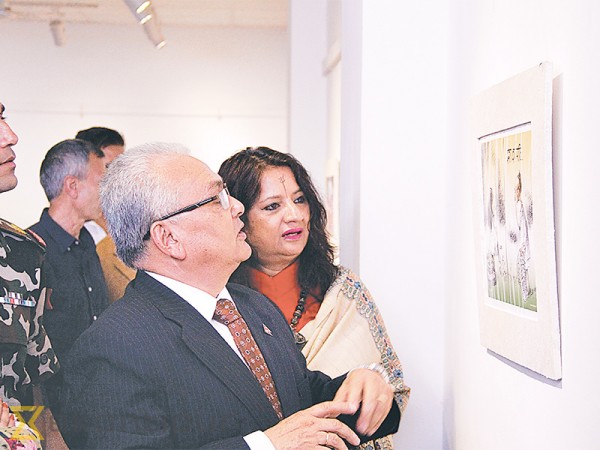 Also on display are the works of Kedarbhakta Mathema, who is also an educationist; Bhanu Bhattarai, RK Thapa, Deepak Gautam, Sudarshan Gautam and Rabin Sayami, among others.

Speaking during the opening ceremony, Minister Pandey highlighted the significance of cartoons in today’s society. She also said that Cartoons not only captured the absurdities of the system and contemporary society but also could go a long way towards making a society progressive.

The featured cartoons scrutinized the problems faced by Nepal’s education system – and many of them showcased the difference between the government and private institutions and brought to light several other problems in the educational sector.

The event that was jointly organised by the Education Journalists Group, Alliance for Social Dialogue and Cartoonist Club of Nepal saw the presence of dignitaries such as Mahendra Bahadur Pandey, minister for foreign affairs; Ragini Upadhyay, chancellor of the Nepal Academy of Fine Arts; Chairperson of Cartoonists Club of Nepal Abin Shrestha and educationist Kedarbhakta Mathema, among others. The exhibition will be on till 9 September.