Along with having a strong story-line, it is also very important to have high-quality animation that brings life into the stories with the use of animated characters! So if you are keen on learning more about what goes into character animation, the two day workshop by Native Puppets on 24-25 May at Whistling Woods International, Mumbai is the place to be. 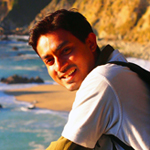 AnimationXpress.com caught up with Anand to know the line up of the workshop, his views on creating entertaining character animation, speakers at the workshop and more and he starts the conversation with us by saying, “Workshop is for those looking to be feature film animators, get them thinking on directions to go after and quality levels and benchmarks to aspire to. Give them an opportunity to directly connect with industry professionals and hear about the inner workings.?”

This is great Anand, so before moving onto the workshop, would like you to emphasise on what ‘character animation’ is all about and how would you define this to a novice?

??To quote the commonly used phrase – ‘Animators are often said to be actors with a pencil’. Or these days with a mouse as well. 🙂

Actors portray characters in the over-all story-telling process of a film and so do the animators, except the medium used is different and the approach to acting and creating believable performance varies widely as well.

To simply put it – an animator is responsible for all the physical movements, emotions, expressions that a character portrays in an animated film and bringing the character to life.

Please tell us about the line up of the workshop?

?Let me start by saying – you are not going to believe how excited i am with what’s in store for this workshop. On the onset – its 2 full days dedicated to character animation – i don’t think it’s ever been done before in India before. There will be lot of nuances to pick from the workshop. Attendees will watch and learn how experts who have feature-film level experience go about working on their shots, their methods and workflows, the challenges they face. Ton of useful tips and tricks will be shared.

All the speakers have considerable experience under their belt and are very passionate about not only the art of animation but also sharing their knowledge. 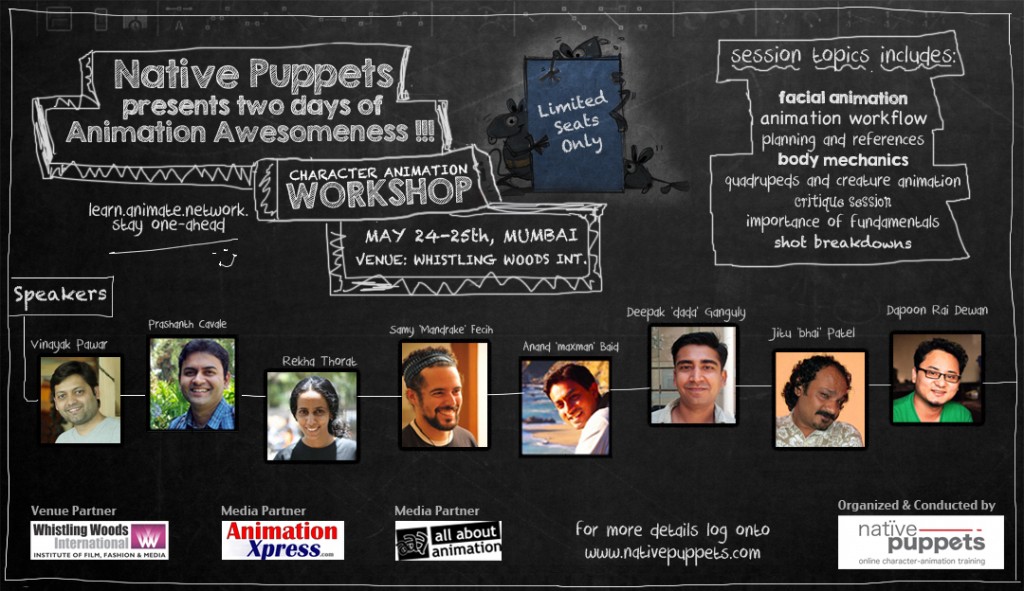 It must be very essential to give more focus to character animation so that it justifies the traits of the character you are animating?

?If you are referring to animation being one of the key departments in the story-telling process, absolutely yes. In my opinion, this is where the narration of a film comes to life.

For example – in big budget feature films, considerable time and effort is invested in exploring each character ? much before actual production starts – whereby the character  nuances, their behaviors? and attributes ? are explored.On bigger shows, Animation Leads are casted to key-characters ? ?and they in turn ?work on? the various possibilities in which a character can emote, move, walk, express etc thereby setting a ?benchmark of traits to adhere to.? Besides that, a character continues to evolve through the film as animators bring in their own flavors to the mannerisms as well.

?Were you involved in any such exploratory processes?

Yes – it was during the Walt Disney – Yash Raj Films production of Roadside Romeo, whereby I worked closely with the Director and the Animation Director of the Film on the protagonist, Romeo, voiced by Saif Ali Khan. I would record myself acting the character beats and pitch it to the Directors. This was very early on in the show, even before actual animation production began. It remains one of my cherished moments till date as an animator

?Is there any pre requisite required to be a part of the workshop??

You just need to be interested in Character Animation. That is it. 🙂

Even if you are completely fresh and starting out, it is always good ?to hear the language and what goes on behind the magic created by animators for the big screen.

?Should Principles of Animation be given first preference when animating a character or can it just be imagination?

?It is both. Creativity stems from imagination and then without learning and applying the principles of animation – there are chances the entertainment value or the believability factor will not fully accomplished. And art being subjective, one can debate about ignoring principles and doing your own thing – which might just be fine. I just believe, one should surely learn these principles before going about breaking or bending them.

What all aspects do you think will benefit the participants?

Like I shared above, there will be lot to absorb and soak into. As much art animation is, there is a good amount of technique involved as well.? Such workshops are great platforms for networking, clarifying doubts, inhibitions. And all of these can and will only help you in making a better decision.

Can you give some interesting examples of well-executed character animation ? in feature films?

There are so many that it’s hard to point out any particular one that stands out as the best. But just to name a few?- Performances in Spirited Away and Ratatouille are the ones i like a lot and for cartoony style of animation – i love all the Madagascar movies, especially King Julian and the Penguins.

Do you plan to give out any special opportunities to the attendees?

?Yes – if anyone is interested in taking up the program at Native Puppets, all they need to do is bring in their showreel and on-the-spot scholarship upto 20% of a term fee will be provided to them. There will only be limited number of scholarship available. So if anyone is interested – they can write to us at info@nativepuppets.com for more details.

We are also conducting an Online Best Animation Showreel Contest in collaboration with CGTantra and Digitales Studios. More information HERE.

What is the last day of registering, what is the fee ???

?The last day for registering for the workshop is – May 22nd.
?
For more details ? like the session topics, speaker profile, testimonials, entry fees and venue – ? CLICK HERE.

?Well, I think it’s already been over-said and lot of people, especially new comers are beginning to understand – that software, technology are all enablers. They are the initial hurdles to get over with before getting on to the actual meaty fun part of animation. Once the tech-know is accomplished, there is whole level of art involved in the execution process of Character Animation. And that takes a long time to be good at. It comes from repeatedly doing it and doing it and doing it.

One has to also know that experienced feedback is important when learning something new. It is easy to lose direction and focus when you don’t seek out to improve by asking for feedback from someone who is better than you.