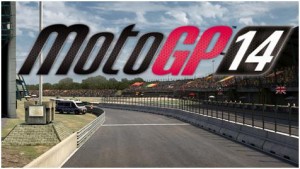 MotoGP 14 boasts an all new sound engine and graphics engine which will allow for improved engine audio as well as revamped graphics, including improvements in lighting and shading.

MotoGP14 features more than 100 available riders, all the official manufacturers, all racing classes and 18 tracks in a brand new racing chapter based on the Official MotoGP World Championship.

Compare MotoGP 14 with the real-world sport of motorbike racing and you’ll end up with a long list of irregularities, but to do so would miss the point entirely. It’s about striking an even balance between realism and gameplay, and although the braking distances and off- 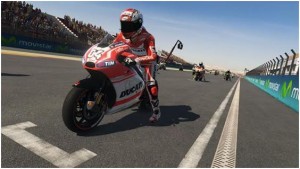 track excursions may raise the odd eyebrow, the art of feathering the throttle through a sharp left-hander feels perfectly poised on the DualShock 4. There’s even been a marked improvement in the fallibility of the rider AI. They now make occasional mistakes rather than racing like a pack of autonomous robots.

The game features many single player and multiplayer modes. Single player modes include Time Attack, Grand Prix, Championship, Career and a new Scenario Mode, where players are put into a variety of situations based on past MotoGP events. Career mode will be similar to the previous title. The player will create their own rider and start as a wildcard with the ultimate aim of becoming MotoGP World Champion. Along the way the player will manage sponsors, bike upgrades as well as virtual fans and press through social media and interactions. 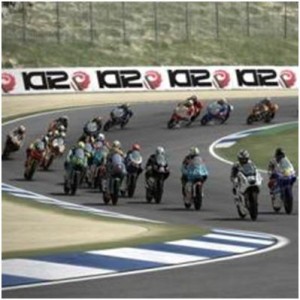 The game includes both 12 players online and two player local multiplayer. Online game modes include Grand Prix, Championship and Sprint Season. Also included is a mode called Split Battle, where players aim to complete the most number of laps and fastest sector splits in limited time. Local multiplayer modes are yet to be announced, however the game has been confirmed as having two player local play.

In terms of available modes, MotoGP 14 delivers all the usual suspects while throwing some interesting extras into the mix. Instant Race, Grand Prix, Championship and Time Attack all function exactly as stated, and with a generous spread of five rosters and 18 tracks – including the new Termas de Río Hondo circuit in Argentina – the only notable omission is Michele Pirro. But with a healthy Cal Crutchlow both in the game and on the box, you’re free to take Ducati to the top of the table in a run of Casey Stoner proportions. 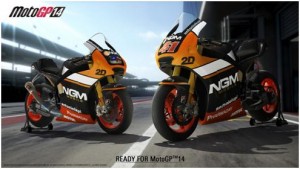 The only disappointing thing about this pair of nostalgic modes is that they’re fairly short-lived. There are 34 challenges between them, but aside from increasing the AI difficulty, there’s little in the way of replay value. This makes the inclusion of the redundant playable Safety Car mode more grating. Milestone’s time would’ve been better spent coming up with more challenges rather than shoehorning a BMW M4 Coupé into a motorbike racing game. 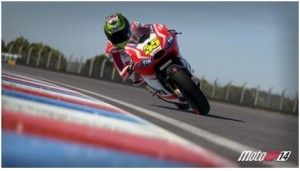 Add the graphical overhaul, refined handling and experimental modes together and you end up with a racer that feels much more competitive that its immediate predecessors. Milestone has a habit of releasing motorcycling sequels that hold little distinction outside of the yearly livery changes, but in MotoGP 14, it’s not relying solely on the draw of the licence and the pull of its physics. If ever there was a game made by MotoGP fans for MotoGP fans, this is definitely it.

My verdict is ‘PLAY’