Latest News People
It has been almost a month since the unfortunate demise of industry veteran Arnab Chaudhuri. While there was an immediate sense of shock and sadness throughout the industry, soon people from across the world started sharing their condolences while reminiscing the good times that they have spent working or collaborating with the Arjun director and how he inspired so many of them. In a mail to the director’s family, Mahindra Group chairman Anand Mahindra mentioned, “I remember Arnab so clearly. I remember everything about that film, because it meant so much to me get it right. And getting it right he did.” The aforementioned film was a live action documentary piece for MRV – the Mahindra Research Valley, on which Chaudhuri had worked. The chairman further adds, “I mourn Arnab’s passing all the more because he was a part of India’s creative fraternity. One is left with a feeling of real sadness at what the world has missed with his premature passing and what he could yet have accomplished, had he been granted a few years more.” As we had mentioned earlier, his most notable contribution to the Indian animation industry was Arjun: The Warrior Prince. Alongside Ronnie Screwvala’s UTV, Arnab Chaudhuri directed one of the most iconic animated feature films from India. Says Ronnie Screwvala, “Arnab and I go back over a decade to when he was contemplating moving back to India from Hong Kong to pursue his dream in animation and movie making. Arjun is his legacy to the highest level of quality animation and story telling coming out of India and have only fond memories when we worked together. His talent, attitude and creativity was unique and he will be missed by all.” The film was released in 2012 as a Disney film since Disney had acquired UTV. The same year, Arjun: The Warrior Prince earned a Best Feature Film nominations at numerous prestigious international animation festivals. From Annecy to Holland International and Ottawa International, the list was long. In India too, it had brilliant reviews even though, it ran for a limited time. But what actually put the stamp of excellence on the feature was that – Walt Disney, U.S submitted five films that year for the Oscars and Arjun: The Warrior Prince was one of them. Putting up an animated feature which was acquired and not created by Walt Disney or Pixar, the companies which create some of the best animation in the world, is a clear indicator that Disney considered Chaudhuri’s film as a potential Oscar winner, and it was in the long list.  What is interesting is that it wasn’t an India submission, but the Walt Disney Worldwide submission. The company screened the film at the prestigious El Capitain Theatre, released ads in LA Times and hugely backed it. In fact, the critic blogs at that time were truly appreciating it. Even Jerry Beck, the famous animation historian, wrote about it of being “a worthy possibility for nomination.” However, it was unfortunate that it had to be taken out of the short list running owing to a technical reason just a week before the shortlisted films were announced. 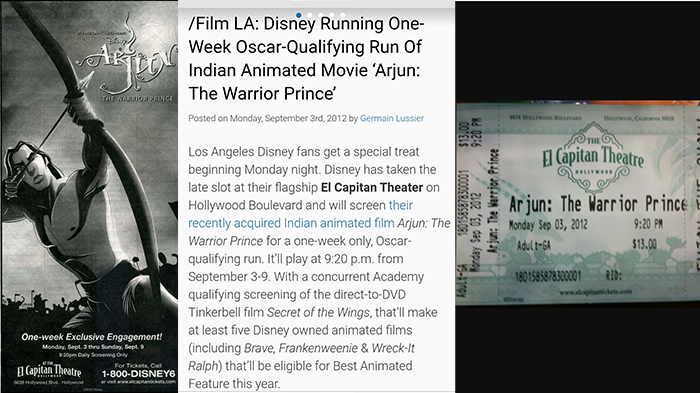 Right after that, John Lasseter of Pixar Studios, invited Chaudhuri to showcase the film at Pixar Studios in the U.S.A and even presented him with a small memento in the form of the film’s disc, thanking him for making the film. This was the first time that an Indian animated feature was being showcased at the Pixar Studios, in fact there has been none since then either. 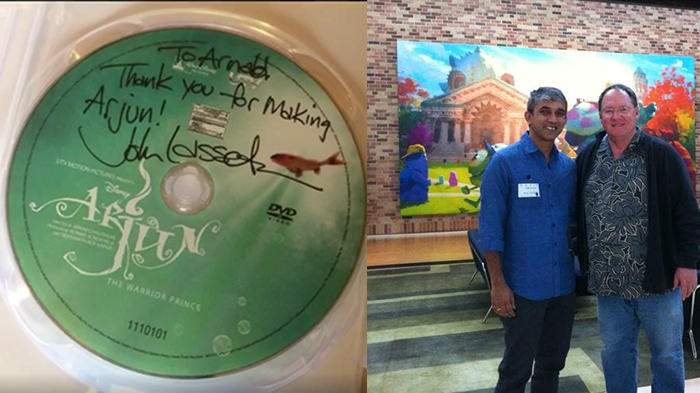 Apart from his stint around Arjun: The Warrior Prince, Chaudhuri has been instrumental in other roles across brands. At Turner, he held the position of senior creative for South Asia – Cartoon Network and Pogo. He helped create Turner’s first pre-school block in the region, Tiny TV, which was an instant hit.  Then, in late 2003, the team was apparently given 90 days to create and launch a totally new kids channel for India which required them to find a name and create an identity from the ground up.  The result was Pogo, which launched on 1 January, 2004. Orion Ross was then the regional creative director for Turner Entertainment Networks Asia Pacific. He shares, “Arnab mocked up a logo animation early in the process to show everyone how it would work—nobody in management really understood the name until they saw it, but afterwards they were totally convinced.  Arnab directed a live action shoot to create the launch promos and channel branding, with real kids shouting, bouncing, flying and being covered in paint.  They loved every minute of it, because Arnab treated them all like his family and brought so much love to the set.  I think we won 17 Promax awards year.”

Chaudhuri wrote and directed a menacing Tom and Jerry spot called Marinate You inspired by Bob Dylan and Tom Waits, which was performed by Channel [V]’s deep-voiced former creative director Rob Middleton. According to Ross, Chaudhuri brought his NID training, and his NID network, into play for Pogo’s new arts program M.A.D. (Music Art Dance).  He infused the show with his usual mix of attention to detail, a passion for excellence in design and execution, and irreverent counter-cultural comedy.  He was also at the heart of development for Turner’s co-production with Sesame Workshop, Galli Galli Sim Sim.

Says Ross, “Throughout his career working in children’s media, he never dumbed down his work or shied away from sophistication; if anything he was driven by a responsibility to make things extra special to engage, delight and inspire a young audience.” Ross, who is now VP of original programming animation, media networks Europe and Africa, The Walt Disney Company further adds, “Arnab was a brave, boundary-pushing creative explorer who tackled every brief with heart, soul and wit—and a drive to always make something both fresh and excellent.  He made friends with everyone, learned from everyone, respected everyone—and then pushed everyone to do something better than they’d ever done before. I missed him when he left Turner to move back to India and direct Arjun—but I always knew he was on his way to bigger things and was incredibly happy he had this opportunity.  I remain profoundly grateful for the time we had working together, and for everything he taught me. Arnab remained a dear friend to the end and I am utterly bereft by his sudden passing.  He had so much more to give.” During his time at Channel [V], as everywhere, he made a position for himself. Famed actor Vinay Pathak had the opportunity to work with him during his time at the channel. Shares he, “Arnab Chaudhuri, my friend, buddy, and an ex colleague (at channel V) , was someone that I always aspired to be like. One very seldom comes across a creative mind like his. He was the head of promos when I joined channel V, and the impressions he’s made on me , are still intact and going to last forever. He was a true artist. Immensely talented , great visionary and a ‘Real Genius’. Genius is not a term I use loosely, but for Arnab, Genius is where the adjectives commence with for him. He had a gift of simplifying anything complex, and most creations are complicated. He’d indulge in anything that required improvement and would make it seem so easy, like a Gene Kelly’s uber machismo and that dancing grace.” Even when he decided to part ways with Channel [V], the team rallied in support of his future endeavours. In a note to the internal team, then Channel V creative head APAC Rob Middleton said, “Arnab has made more than this mark here, he’s the epitome of everything that’s good about us. His incredible prolific ability…. constantly churning out the best in himself and all those around him is the stuff of legend. His belief in what we do and our reason for being inspired more than those working directly for him. I have seen depressed, down-beaten, ulcer-ridden salesmen come out of his office with a look on their faces normally reserved for television evangelists. When there was a problem, he beat away the drunken swine of finger pointers with a ‘how can I help?’ at once sobering them up and getting them to work together for the greater good. If he put his mind to it, I’m sure he could be leading the free world in a matter of months. He taught me a lot more than I could ever teach him about the idea of a team.” Pathak concludes, “Arnab was a magician who could do/fix/create anything, but he never acknowledged that in his own polite, unassuming way. He didn’t know how to take a compliment. That’s the first thing I learned from him, because it was not a deficiency in his case, it was his elegance. I’ve always been in awe of my friend Arnab, and till date I remain so. He’s left us very soon, too too soon. It’s truly a huge loss, personal, and (let me tell ye) social. He was a true liberal, and how we need him now, and always.”

Apart from his career being a stellar one, Chaudhuri undoubtedly inspired a lot of individuals throughout his journey. According to one of his juniors at NID, after Chaudhuri had completed the course and would come visit the campus for some presentations, the entire college would know that he had come. In the message the junior says, “He was among those legendary super seniors who could start a party around him in 15 minutes!”

Another individual who was his junior at NID and had worked with him post that shared, “All of us who worked with him or within the creative platforms he put together, I think have variations of the same sense of having experienced something that left holding points for being irreverently serene with what happens. And not allow squalor or sloppiness in the application of self. He was way, way up there as an example, interacting with him however didn’t require a pedestal.” All that said, the industry indeed has lost a true legend. Going by the testimonies of people he had worked with, irrespective of the time frame, Arnab Chaudhuri left an everlasting, somewhat surreal, yet a very real impression. Of creativity and professional splendour, the demise of Arnab Chaudhuri will definitely leave a void in the Indian industry, but we hope his legacy continues to live!