Animation CGI Latest News
Over the years, social media has proved to be quite an effective medium for content creators at different scales to showcase their work, to a large number of audience. Most creative minds across the nooks and corners of the world, who have less means of publishing their work to reach the masses, resort to this medium as it’s powerful and interactive. With digitisation and cheaper internet, content is now travelling like never before. One such content creator and animator is Andrea Love, whose animated videos have gone viral on Facebook, Instagram and more, courtesy – she animates wool! Her social media is flooded with appreciation for these adorable tiny videos that she single handedly creates. Based out of Port Townsend, Washington, a beautiful little Victorian seaport in the Pacific Northwest, Love became familiar with needle felting in 2012. “I had just begun animating, and thought it would be a great material for my stop motion puppets. From there I started incorporating it into more and more aspects of my work, until I was making entire videos out of wool. I am fascinated by its properties and how it lends itself to animation. I began experimenting with animation in college, and created some of my very first films around 2010.  I didn’t plan on pursuing a career in animation, and treated it more like a hobby for several years. I was in my mid 20s when I started freelancing, mostly for local businesses. It was 2016 when I decided I wanted to be known for my work animating with wool. Most of my projects since then have worked towards that goal, ” Love shared with Animation Xpress. After receiving B.A from Hampshire College in 2010, with a concentration in video production and film studies, she spent several years making content for businesses, nonprofits and narrative films, teaching herself along the way. Eventually, she started having followers online, and exploring her love for wool animation. 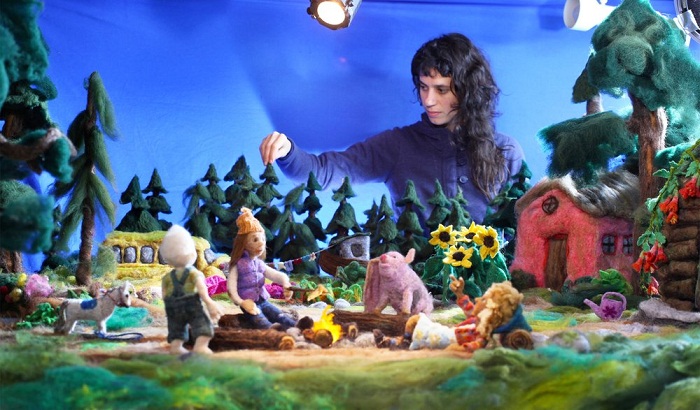 Love runs a full service animation studio from her basement and creates commercial work, as well as short narrative and documentary films. Her work has been screened at film festivals around the country including the Tribeca Film Festival and the LA Shorts Fest.  Talking about her inspiration for these lovely videos, she added, “Wool is my inspiration, and I am constantly trying to think of new and exciting ways to experience it. I have been using Instagram as a testing ground for ideas and techniques, which gives me a great idea of what people respond to, like to challenge myself to make everything out of fibre, even when it would be easier not to. This often results in some unexpected discoveries and tangents to follow. I find the videos that resonate the most contain things that most everyone can relate to -cooking or painting for example- and frames it in this new way.  This type of animation is not as well known as something like claymation, but I believe it will continue to grow in popularity as more and more people learn what it is.”  Her basement studio has grown into a full functional service space, and brings contract workers for help with various tasks here and there. Though Love is largely on her own, she hopes to build up a small team sometime soon. Love is involved in every step of the process, and her personal Instagram videos tend to be pretty spontaneous and improvised. But the long form works contain many steps. “Usually it begins with an animatic to break down what each shot will be.  Then after designs have been approved, it’s onto puppet and set fabrication. I use wire armatures, and build sets on rigid foam.  Once the set and puppets are complete, I set up my lighting using various stands and an overhead PVC grid. I animate on twos, so 12 frames per second, using a Canon 6D paired with manual Nikon lenses. I use Dragonframe to capture the stop motion and then edit in Final Cut. I often work with sound designers, voice actors, composers, and post production artists to fill out all the other aspects of production,” said she. Love is currently working on an eight minute stop motion adaptation of Thumbelina, titled Tulip, where she’s collaborating with children’s book author and illustrator Phoebe Wahl, another Northwest artist.  Tulip tells the story of a tiny child who gets lost in the garden and goes on a woolly adventure to find her way home. They are in the animation stage right now, which will take some months to complete. All her past films have been for clients, so it’s a big step for her to generate original work where she’s in the driver’s seat. “We are running a Kickstarter in February to raise the rest of the money for production. I am so pleased with the way that this project is coming out, and can’t wait to finish it and get it out into the world.  I also have more cooking videos in the works, which will be released on Instagram and YouTube periodically throughout the year. There is no animation industry here, so it is doubly important for me to be online sharing my work,” concluded Love. With the powerful medium of social media, creators and artists like Andrea Love are able to hone their talent and cherish their dream of becoming successful by garnering more eyeballs and getting noticed eventually landing up with lucrative opportunities.


@tulip_film is about to take a giant leap forward with an official Kickstarter campaign launching next week on 12/12! @phoebewahl and I have been pouring our hearts into this film and we hope you will consider pitching in to help us get it across the finish line. We are going to be offering a ton of awesome merch and will be introducing more characters and sneak peeks of animation. Stay tuned! . . . #stopmotion #animation #kickstarter #crowdfunding #shortfilm #womeninfilm #needlefelting #fiberart