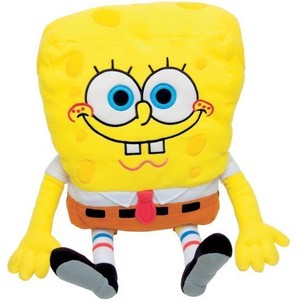 Kicking off this November, an exclusive SpongeBob talking plush complete with sound chip and Patrick and Plankton finger puppets will be available exclusively in more than 600 full line Macy’s stores and Macys.com, as part of the Macy’s collectible plush program that runs through 31 December.

“SpongeBob SquarePants has experienced many iconic moments over the last 15 years, and we are honored to add Macy’s coveted holiday ambassadorship to the list,” said Nickelodeon chief marketing officer and president consumer products Pam Kaufman. “The holidays are a magical time of year and who better than SpongeBob, the eternal optimist, to deck the halls with cheer this season.”

“For over a decade,  SpongeBob SquarePants has delighted millions of spectators along the streets of New York City and several millions more in homes across the nation,  as he’s soared down the streets of Manhattan in the Macy’s Thanksgiving Day Parade,” added Macy’s Parade & Entertainment Group VP Amy Kule. “We are overjoyed that SpongeBob will be adding Macy’s Holiday Ambassador to his list of entertaining accomplishments as he helps Macy’s kick-off the holiday season in our stores across the nation.”

Macy’s collectible plush program has for almost two decades, featured some of the most beloved and iconic characters in history. Selected to highlight the family fun and excitement that awaits shoppers at stores during the holiday season, SpongeBob SquarePants joins a star-studded list of the world’s most famous characters that in the past have welcomed the holidays at the retailer. From the first plush of Babar the elephant to the most recent stars including The Smurfs, Kermit the Frog, Scooby-Doo, Snoopy, Shrek and Mickey Mouse, the plush has become a Macy’s tradition and a coveted collector’s item.