'Jumanji: The Next Level' is now on Amazon Prime Video; a perfect lockdown entertainer -
Skip to content
Latest News

Amazon Prime Video is now showing Jumanji: The Next Level. Everything the friends know about Jumanji is about to change, as they soon discover there’s more obstacles and more danger to overcome, they discover that nothing is as they expect we can say the game has updated with new some new features. 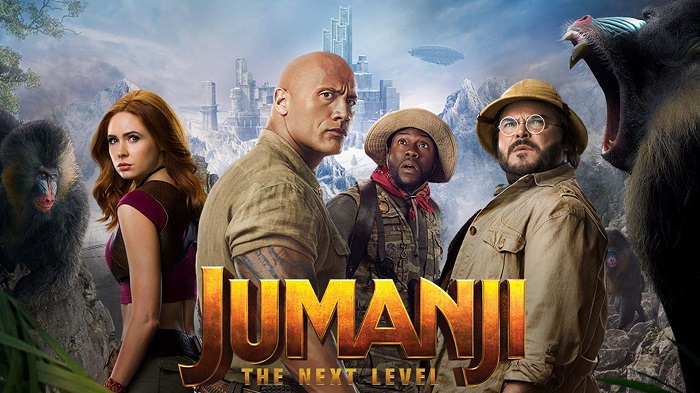 Directed by Jake Kasdan, the film is set three years after the adventurous ride in Jumanji: Welcome to the Jungle, where viewers’ favourite thrill-seeking group of teenagers, along with an old friend and two unwitting additions, are trapped in Jumanji. Besides Johnson, the film comprises a stellar star cast, including Jack Black, Karen Gillan, Kevin Hart, Awkwafina and Nick Jonas, among others.

The movie has shown the quadraphonic chemistry between the four stars: Dwayne Johnson, Kevin Hart, Karen Gillan and Jack Black  and have been joined by Nick Jonas, Alex Wolff, Morgan Turner, Ser’Darius Blain, and Madison Iseman reprising their roles from the previous film, alongside newcomers Awkwafina, Danny Glover, and Danny DeVito.

Jumanji franchise is popular irrespective of age as the movie series is known to maintain the mystery and the fantasy of the video game. However unlike other installments, the third installment has lost the surprise element where bunch of unaware people being dragged in a real life videogame.  As this time Spencer wanted to go inside the video game as he wanted to experience how it feels to become as powerful as the character Bravestone in the game one more time. Although that didn’t happen since the game was broken and he landed as a new character Ming Fleetfoot who is not as powerful as Bravestone. When Spencer’s friends Bethany, Fridge, and Martha found that Spencer is missing and the game is running they decided to re-enter Jumanji to save him. Spencer’s grandfather Eddie and his friend Milo Walker heard the commotion and inadvertently get sucked into the game too before any of Spencer’s friends can select their avatars.

You can read the full review here

You can read our review here

You can watch and completely enjoy Jumanji the next level in this lock down .