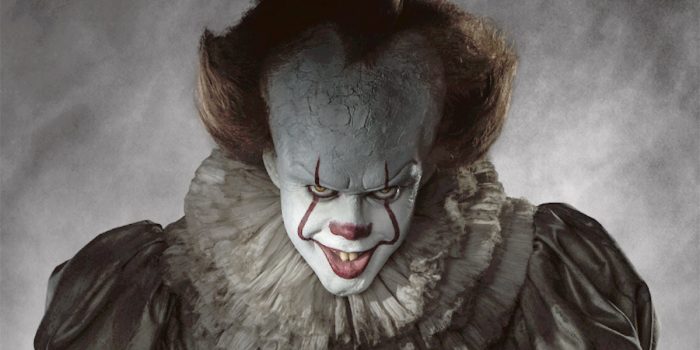 The film tells the story of seven children in Derry, Maine who are terrorised by a clown and who in the process face their personal demons. That is it, for this story is told in a fairly simple plot, predictable but not completely, for plot is not the strength of this movie as is the case with the Insidious series. And that, may be a dangerous venture into this genre if you do not have anything new to offer. Yet, it does a commendable job of engaging you right from the beginning, and faltering nowhere with mindless detours and baseless scenes that are just stuffed to force the film into the horror genre.

IT sticks to the conventional three-act structure as is seen in most films: the Setup, the Confrontation and the Resolution. It establishes the characters quickly, being to the point in what it is showing about them. There is no unnecessary portrayal of anything and anyone. The film builds at a good pace, being to the point and (thankfully) not keeping the audience waiting and then letting down.

The horror sequences however are unconventional and quite refreshing. The film strays clear of the monotonous and mundane glass shattering, objects flying and dolls muttering. The shots play around the fears of the seven children with special effects that have a tinge of ambiguity, which are in congruence with the Stephen King’s writing style.

The animation and visual effects are used selectively and in a way that prove to be spine-chilling. Without revealing the shots (as they will ruin the originality of the sequence), what can be said is that the effects are unique and at the same time vague as well as creative. And certain shots go from being jaw-dropping to disgusting and then frightening, courtesy Rodeo FX that worked on most of the VFX shots.

What stands out in the entire film is Bill Skarsgard’s portrayal of the clown Pennywise, referred by the kids as It. The depiction of the clown is chilling yet gripping, courtesy Amalgamated Dynamics for its vivid representation and work on character effects. The studio has also worked on the special makeup effects for the other characters (or should we say ghosts), giving them looks that are spooky as hell.

IT also touches upon the themes of love and friendship, with the child actors beautifully depicting fear, innocence and determination that is very natural of children.

Combine all of that with the wonderfully executed cinematography, sounds, lighting and editing, and the movie becomes a wholesome and fulfilling experience of a horror-thriller. IT is a film that will stay with you long after you leave the cinema hall. The petrifying clown, swift change of the mood, awfully scary shots and the grit of the seven keep lingering at the back of the mind.

Final Verdict: IT breaks away from the regular horror genre films in a way of its own and establishes itself as a fresh one amongst the many that come and go. The film brings alive the till-now hibernating horror-thriller genre. For those of you who are horror-buffs, watch IT to cast off the monotony in ghost stories. For those who are not, you will start to love it.