I think 2018 maintained the momentum for the Indian Comic book industry. While the sales trends were stable with 2017 for the usual suspects like Holy Cow, Abhijeet Kini, Meta-Desi, Chariot Comics, Yali and TBS; what was great to see was the entry of more independent players such as Rahil Mohsin, and the consistency with which most of the independent comic book companies released their titles. 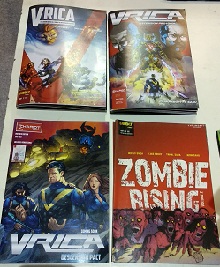 For Chariot Comics personally, 2018 was a year of preparations – as we race to finish the VRICA trilogy and prepare our other titles such as Damned and AISA – which have been in the works for a while. Who knew building a wider comic book verse was such an arduous task!

What was good to see in 2018 was also the elevation in quality of artwork and storytelling for most of us, as well as some IP acquisitions for some publishing houses. I think this signals the path forward for great things in the future.

When it comes to events like Comic Con India I have always mentioned that it is the best platform we have had to grow. The additional push they have given to us as Indian comic book publishers, by enabling a cost-effective and consistent city-to-city presence, has translated in increased sales and publicity. Comic Cons remains the single largest spots to sell to old fans and convert new ones – given their sheer scale and footfalls.

At this point let me also address the general talk that has been going around saying Comic Cons are more about merchandise versus comic books. The answer is simple – it’s a function of the market. If 80 per cent of the footfalls prefer the 17th version of the same Game of Thrones tee, then both the organisers and sellers will gear up for that.

Why aren’t there more comics? Because the audience isn’t really inclined to buy them as much as ‘merch’. So, it’s difficult for more comic book houses to mushroom and survive year on year – unless they are burning through their own pockets. If we want to see more comics at Comic Cons, then the onus needs to be on the audience to buy those comics, DC, Marvel, Image or us, for better or for worse, and drive that presence.

Comic Con cannot be blamed for building an experience that the audience desires – it is their job to do so. Apart from the biggies, all the independent Indian comic book houses, which consistently publish year on year, are there at Comic Cons, enabled by Comic Con India’s Indian Comics growth program– and we’re pretty easy to find.

As an audience, look, buy and give feedback (good and bad) only then will we see a shift back to comics as a dominating portion of Comic Cons.

Which brings me to the Indie Comix fest – while I haven’t participated in any of them yet – I think they are a novel and much required initiative to give the local scenes in various cities a platform and outlet. From self-publishers to individual artists, I think Indie Comix Fest works for that target segment of artists, writers and audience – and I hope to see them grow from strength to strength in 2019!

(This article has been contributed by Chariot Comics founder Aniruddho Chakraborty and AnimationXpress does not necessarily subscribe to these views).