Animation Latest News
After showcasing their thought provoking animated short films across several cities in India, Kolkata based animation studio, Ghost Animation returned to their home, the City of Joy as the next stop for the screening of its animated short films. Titled, ‘First Flight’, Ghost Animation screened – Mother, Beyond Borders, Watchmaker: At Time’s End and WADE in Kolkata over the weekend, on 22 and 23 February at Sienna Cafe, Park Street. Starting from Mumbai (Anifest 2019), they took their amazingly crafted films to Pune, Vijayawada, Bangalore, Delhi, Kochi, Kozhikode and Ahmedabad.


Finally KOLKATA! We will be playing two shows of #firstflight featuring @wadethefilm , Beyond Borders by @ishamangalmurti , Mother by @gwakanaka , Watchmaker at Times end by @shaheenyes ! . . All shows 6pm onwards, on the 22nd and 23rd of February at @sienna_store Park Street. See you there! . . . . . #ghostanimation #tour #poster #kolkata #siennacafe #shortfilms #animation #2danimation #animatedshort #animationfestival #gig #savethedate

The response for these films has been overwhelming as they turned out to be full houses and garnered appreciation from the audiences. “’First Flight’ has been a very eye-opening experience for us. We found out firsthand that there definitely is an audience for animation all across India, and got to interact with them and know their views, which were very wide-ranging. Starting from Mumbai, the tour expanded to more cities in a very organic manner,” said the Ghost team. Recently, the studio also released the first trailer of TEN, their upcoming animated short, inspired by Bengali poem Haradhoner Dosh-ti Chele (Haradhan’s 10 sons) by Jagindranath Sarkar, to be released in mid 2020.  We spoke to the young, talented team of animators at Ghost Animation – Upamanyu Bhattacharyya, Kalp Sanghvi, Gaurav Wakankar, Isha Mangalmurti, Shaheen Sheriff and Anwaar Alam – about their films : 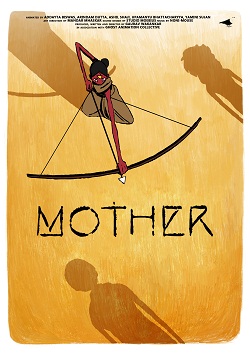 > How was each of these concepts ideated? Wakankar : Mother is the shortest film we have made till date, with the shortest timeline for production. I had initially written a longer story in 2017 which dealt with the social issue of exclusion in social classes and mob mentality. But at the time finishing a six minute long hand drawn animated short film by one person was not possible and it was put on hold.  Two years later in May 2019, I started working on a smaller prequel story of the same film. With Bhattacharyya’s help, I was able to boil the story down to around two minutes and dialogue-less narration. With a simpler story and shorter edit the film was set to be finished with other in-house films in the studio. With limited time and resources, my main motive was to see to it that film wraps production in a few months, as an experiment to try out shorter production pipeline and tight-knit group of talented team coordinating and working together. Sheriff : Watchmaker At Time’s End had a very technical origin. When I started learning 3D, I wanted a story that utilises the specific advantages that 3D provides over 2D, and felt that dynamic lighting is something that could be focused on. So the concept was ‘how would people’s lives get affected if days and nights kept altering haphazardly’. That’s where the story evolved from.  Mangalmurti : I began developing Beyond Borders in 2017. The idea originated with the growing number of attacks on medical facilities reported across various war zones. The articles moved me heavily and drove me to dwell more into the subject of humanitarian medical aid in today’s world. The film took shape slowly after months of research culminating in an interview with Dr. Alan Pereira, a humanitarian doctor working with Médecins sans frontières.   Sanghvi : Wade taps into tangible deep-rooted fears that we have. Climate change is a reality, and so are its effects. Low lying areas like Kolkata, the Sundarbans and more will soon be underwater: it’s a scientific certainty. There’s plenty of literature around this, presenting evidence that surrounds us. The sea-level has risen and the ice-caps have melted leaving no options for the residents of Kolkata to abandon the city. The Sundarbans dwellers who couldn’t, have migrated to the city, but so have the tigers 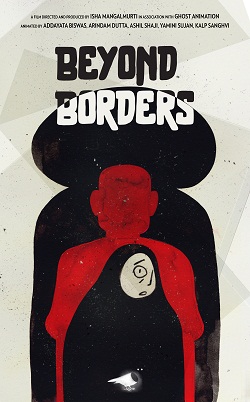 > Each film has a distinct animation style and technique. Please throw some light on the creation and execution.  Wakankar : Mother, being a shorter compact film production experiment, it was necessary to not waste too much time in beautifying the look of the film. I wanted to use a compact and faster design style so that it helps in reducing production timeline. Mandar Mhaskar, a collaborating artist with Ghost since 2016, got involved in the production team as the art director and handled all the background designs, colour palettes, layouts and assisted with character design of the film, which made my job as a director simpler and I could spend more time focusing on shorter editing and better character performances. The softwares used for the film was mostly TvPaint 11 and Krita for Animation. Dividing tasks throughout different teams over the period of production helped in completing the short film. Sheriff : Watchmaker At Time’s End was made to look as if the raw sketches I made in my notebook were lit up in a somewhat realistic yet stylish manner. As for the techniques, Watchmaker was a heavily research-oriented project as the film was made from start to end using only free/open-source software. Throughout production, the workflow kept changing and evolving as more new softwares and features came up, and these were integrated into the film. Some of the major programmes used were Blender, Krita, Gimp, Ardour, Natron, G’mic, Imagemagick and more. Mangalmurti : Beyond Borders uses a very stylised and experimental visual treatment to aid the narrative of the film. The simplification of visuals into more graphic forms using textures and shapes aided the film in telling a very universal story. Isha used a traditional technique of ink and bleach on paper to execute this treatment. This also gave her an opportunity to push herself and explore a different approach in the production of the film. The rough animation for the film was majorly done in TVpaint followed by printing the frames, inking on paper and scanning them to put it all together in composite. Bhattacharyya : The entire film of WADE is drawn on tablets and animated frame by frame. We’ve animated digitally, painted the backgrounds on Photoshop, and have set the film in a 4:3 ratio for a heightened sense of claustrophobia. With numerous collaborators coming on board with an amazing set of skills, it helped us all to contribute to the idea, the script and the execution. For the human scenes, the team shot a lot of footage of themselves by enacting the actions. They also spent a lot of time at Alipore Zoo studying tigers, their anatomy and their movement. 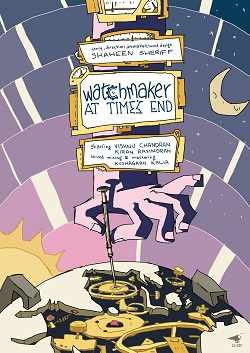 > Tell us about the who helmed which project and how much time they took to be made  Wakankar : Mother was written, produced and directed by me, with Mhaskar as an art director on the project. With a team of four to five very talented animators – Ashil Shaji, Addayta Biswas, Arindam Dutta and Yamini Sujan (Summer interns 2019). Besides them, Bhattacharyya handling around four shots in one go helped the animation of the film to get done in only two weeks. By the end of June the entire rough animation lineup of Mother was in place, while started working from May.  After this I handled the cleanups and Mhaskar finished all the background art. Nikunj Patel and Radhapriya Gupta, two Mumbai based artists offered their skills and talents to make beautiful music scores and sound design for the short film. To colour the frames of animation few students from NID offered their help. The film got done in around four months. Sheriff : Watchmaker At Time’s End was made almost entirely by myself, from story to animation till compositing, which is why it took roughly five years to complete as life gets in the way. The film wouldn’t be possible without the very natural voice acting by Vishnu Chandran and Kiran Ravindran, and stellar sound mixing and mastering by Kushagrah Kalia. Mangalmurti :  Beyond Borders was directed and produced by myself, along with five animators –  Ashil Shaji, Addayta Biswas, Arindam Dutta, Yamini Sujan and Sanghvi handled the rough animation for the film. Sound design was handled by Deepak Ananth, a composer based in Pune. The score for the film was beautifully designed by Venkatram Vishwanathan. It could not have been executed without the support of the Doctors Without Borders, India team and most importantly Dr. Pereira.  Sanghvi and Bhattacharyya : The idea of WADE originated back in 2016 when we were freelancing in Mumbai / Ahmedabad. Written and directed by both of us, it started off with a successful crowdfunding campaign in the fall of 2016, which helped us kickstart the project and production. With over 30 artists including all the partners at Ghost and Troy Vasanth, an exceptionally talented musician and sound designer, through the period of three years WADE was completed in November 2019. It is now being sent out to various film festivals in India and across the globe and has already bagged a couple of international festival selections.

All the animated short films focus on myriad concepts and brings together a palette of vibrant storytelling and trigger our thoughts. More power and cheers to Ghost team for making such films!