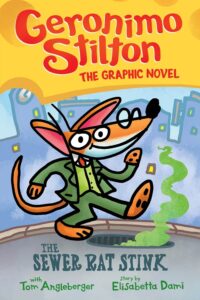 “It is with immense pride that we introduce this very special graphic novel,” noted Scholastic Trade associate publisher Abigail McAden. “We are honored to be working with New York Times, USA Today, and Wall Street Journal bestselling author Tom Angleberger on what is the next progression of the Geronimo Stilton publishing brand.”

The graphic novel tells the story of a stinky smell that is taking over New Mouse City! No mouse can live under these circumstances. Geronimo Stilton and his best friend Hercule Poirat, the private detective, head underground into the sewer world of Mouse Island to investigate.

“So exciting to see Geronimo Stilton, himself, pursue this wonderful adventure,” noted Atlantyca foreign rights manager Carmen Castillo. “We are so thrilled to be broadening our relationship with our friends at Scholastic on this exciting new endeavor which we hope will introduce our beloved Geronimo Stilton to a whole new group of readers in a whole new way. Angleberger has done an amazing job at putting his own touch and adapting Geronimo Stilton’s adventures that graphic novel fans are going to love.”

Geronimo Stilton is the world-famous Italian children’s book series. Scholastic Corporation has published the English version of the series in the U.S. since February 2004. Publishing rights to the Geronimo Stilton series have been sold to many of the world’s most prestigious publishing houses with the books having been translated into 49 languages and distributed to over 150 countries. The series has sold over 166 million copies worldwide, and with 249 editions, it is one of the best-selling children’s book series ever written. Sales of Geronimo Stilton books top 69 million in the English speaking countries.