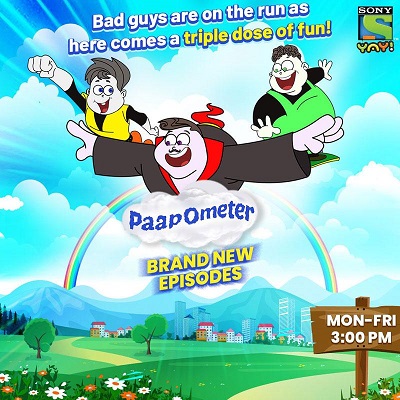 Earlier this month, Indian kids broadcaster Sony YAY! announced a fresh content line-up for its would-be-next flagship show after Honey Bunny ka Jholmaal, Paap-O-Meter. According to the channel, the horror comedy has received great response from the younger audience and thus Sony YAY! decided to ramp up this animated property.

Sony YAY! business head Leena Lele Dutta told AnimationXpress, “We have recently added a significant bank of fresh episodes of Paap-O-Meter which has received a phenomenal response. We are also planning the release of the first Paap-O-Meter movie in the coming months.”

Paap-O-Meter had been active on Sony YAY!’s content slate but had limited grid space in the last three years, unlike Honey Bunny Ka Jholmaal and other shows on the channel, as Sony YAY! Programming head Ronojoy Chakraborty mentioned in a recent interaction.

Said Chakraborty, “Paap-O-Meter with its unique and one-of-a-kind subject in the kids genre, always had a loyal fan base despite having a limited grid space when compared to the other programmes. With this show, we wanted to bring a very jovial perception around the concept of ghosts. We wanted to create a paradigm shift in the minds of kids that ghosts are not horrific creatures always and can be friendly too! Since its launch, Paap-O-Meter has done well, which propelled us towards ramping up the production to provide more of it to our young audience”

Sony YAY! also carried out a research, through direct interaction with kids and found that the characters that Paap-O-Meter – Bhoot-boss and Thakela-Pakela are very popular amongst kids and so the channel decided to expand the IP.

Speaking about the ideation of the show and characters, Chakraborty noted, “We are always driven by insights that we derive from our audience and their evolving preferences. Each production and conceptualization of our shows start with insights gathered from varied focused groups. Hence,we are always on the lookout to understand kids’ content preferences.For Paap-O-Meter, we wanted a funny, entertaining horror-comedy show filled with moral lessons on values, without being too preachy. So, the characters had to be amiable even if they’re ghosts and not unpleasant to kids. We didn’t want the three characters to look inhuman from any perspective so that was the starting point. Then we started designing those characters and consciously gave them human characteristics so that kids could relate to Thakela-Pakela’s fun banter or Bhoot-boss’s strong principles. We also wanted to come up with other-worldly yet funny and relatable names for the character which would instantly connect with our target audience. Everything was designed to make sure that kids experience a new world altogether. We kept all these things in mind when we decided to bring the new episodes. The show presents plenty of underlined moral lessons along with entertainment, so we had to be calculative in that sense.”

Sony YAY! has maximum of its projects commissioned to animation studios in Kolkata. Ssoftoons has been working on Paap-O-Meter, but since the kids channel owns the IPs, while ramping up the production of the show, they commissioned work to different studios as well.

Wackytoon Animation studio, also based out of Kolkata, work on Honey Bunny Ka Jholmaal and they too continued to provide fresh episodes and tele-movies even during COVID imposed lockdown. As animation as a medium doesn’t ask for live shooting, the content pipeline kept flowing.

For the Paap-O-Meter, new half an hour episodes will have two stories of the 11 minute format, and the channel is also producing a longer version of 45 minutes as a telemovie. The Sony YAY! team will extend its stories in order to engage kids in a better way with new adventures and fun. 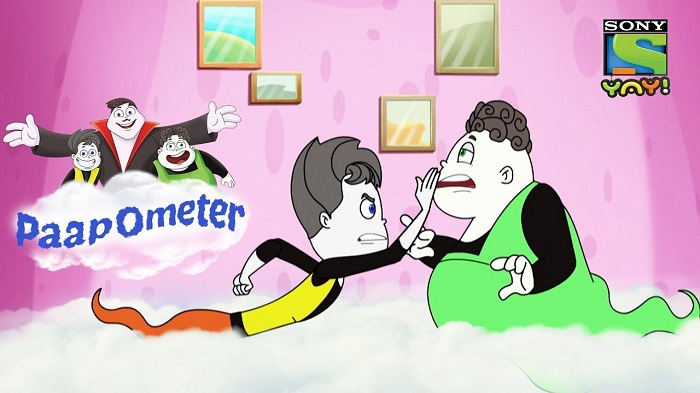 COVID couldn’t disrupt Sony YAY!’s summer plans of new episodes or content and campaign line-up as they had planned much earlier. Added Chakraborty, “

COVID couldn’t disrupt the broadcaster’s summer plans of new episodes or content and campaign line-up as they had planned much earlier. Added Chakraborty, “At Sony YAY! we plan early and keep a bank of episodes ready for at least 2-3 months. Our summer 2020 programming was already in the production phase around October 2019 as animation takes a lot of time to be created, produced, and aired! So, a buffer of 9-10-month is always followed for animation. I appreciate the studios that have been our partners for a long time now and have been managing the production of episodes, despite the challenges, including the super cyclone Amphan.”

Sony YAY! is also experimenting with new pilots, ideas and plots gathered through research and observations, a couple of which are ready and will probably see the light of the day soon. Details are still kept under wraps and the channel said that they’ll get back to us soon. So, till then stay tuned and stay safe!