In Greek mythology, Heracles aka Hercules was the product of Zeus consummating with a mortal woman of the name Hera. Hera drove her son insane, at which point Hercules murdered his wife and children. After regaining his sanity and realising the horrible nature of his crime, Hercules accepts as penance the famous 12 labours, which most of us have read in books. These included defeating the Nemean Lion, the hydra and the Erymanthian boar.

But, Brett Ratner has put much effort into removing Dwayne ‘The Rock’ Johnson’s Hercules from the lofty pedestals of immortality and making him more mortal, as this mythological mercenary now also feels pain on both physical and emotional levels.

For starters, the 12 Labours of Hercules are referenced fleetingly (defeating the Nemean Lion was one of them) and Hercules comes across as a reluctant hero. He is ably assisted in his quests by an assorted crew of loyal followers comprising Amphiaraus (McShane), Autolycus (Sewell), Tydeus (Hennie), Atalanta (Berdal) and Iolaus (Ritchie).

Mythological heroes have undergone numerous changes throughout history, so there’s barely a shred of justification in complaining about how far away a story strays from its most well-known incarnation.

During a feast one night, they are approached by Lord Cotys’s (Hurt) daughter Ergenia (Ferguson) who offers them Hercules’s weight in gold if they can help in defeating the warlord Rhesus (Santlemann), the supposed bad guy. They are summoned to Thrace to train Cotys’s army, who are woefully inadequate for the rigors of battle. But all is not what it seems with Cotys. King Eurystheus (Fiennes) might also have a hand in the fact that Hercules is tormented by visions of his dead wife (Shayk) and kids.

Out of nowhere, Ratner and his team of editors abruptly insert bloody images of children and women being murdered. This flashback is so poorly edited that it’s never clear what’s happening, though it ends with a blatant rip-off of Kubrick’s The Shining.

Like Arnold Schwarzenegger before him, Dwayne Johnson was born to play ‘Hercules’. Like his predecessor, he’s muscular and not without an onscreen chemistry that’s at times perfectly mythological. It’s too bad that Hercules comes off as a supporting character in his own story. The armies do most of the fighting, and when nothing much is happening, Johnson has to share screen time with his team. The movie is stolen by McShane’s oracle, who is the recipient of the aforementioned noble near-death scene, and Tydeus (Aksel Hennie), a warrior so scarred by violence that he is more animal than human. Tydeus’ backstory, which ‘Hercules’ only hints at, is very interesting and gets one to think, what could have caused such pain.

There are some neat 3-D effects, but as with so many recent 3-D offerings, the format doesn’t seem absolutely essential. The cinematography by Ratner’s frequent collaborator Dante Spinotti is vibrant, and the musical score by Fernando Velazquez is stirring. Most important, the pace of the movie is snappy.

Brett Ratner is a somewhat classic filmmaker; which means he favours widescreen composition and fluid cutting over the shakey-cam and visual claustrophobia that most helmers prefer nowadays.

The movie – adapted from The Thracian Wars, a series by the late British comics mainstay Steve Moore – is packed with ambitious ideas about how to tell a Hercules story while holding on to the notion that heroism isn’t inevitable, but is instead the result of people making decisions and working together.

It’s also a half-hearted, but largely commendable, attempt at a revisionist take on the subject, where the supernatural elements are confined to dream sequences and silhouettes, suggesting a world prone to viewing itself in mythological terms. Centaurs are really just men on horsebacks, the Hydra merely a group of bandits wearing monster masks and Hercules isn’t really a demigod.

Brett Ratner’s Hercules may be a smarter movie than either Paul W.S. Anderson’s Pompeii or Renny Harlin’s Hercules: The Legend Begins, but it lacks the former’s sense of scale and exhibition, and never accomplishes anything as instinctive as the latter’s opening shot. 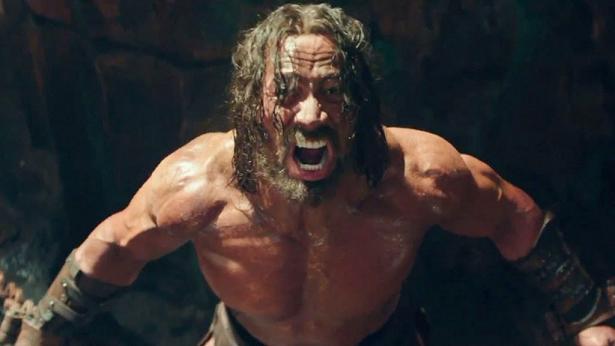 But, this movie has a sense of proportion. Running just over 90 minutes, the movie is often clunky, but fast and unpretentious. And its likable star, Dwayne Johnson, manages to murder legions without ever seeming sadistic. Less gory than 300, less compelling than Gladiator, this new addition to the sword-and-sandals genre seems likely to conjure some impressive box-office numbers.

When Dwayne ‘The Rock’ Johnson finally breaks free of his chains and bellows, “I am Hercules,” the audience is bound to respond with just the right degree of childish glee.