DC Comics partners with Walmart for a new line of exclusive comic books. DC has announced to release four new comic books a month which will be exclusively available at Walmart stores. The new Giant line of comics will mix all-new original content by some of DC’s top creators with reprints and retail price of $4.99. Each comic is expected to have 100 pages and will include four stories. Out of four, three will be reprints and one will be a new story. 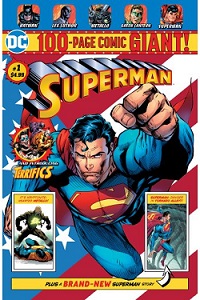 Endurance and One More Chance will be multi-part stories.

Creators include Tom King, Brian Michael Bendis and the Harley Quinn’s writing team of Jimmy Palmiotti and Amanda Conner. Apart from this additional responsibility, they are working on their individual projects. Bendis is working on his first solo Batman release in September — a 12-part story beginning in Batman Giant No. 3. Tom King and Andy Kubert are taking on Superman for their own year-long epic beginning in Superman Giant No. 3. Palmiotti and Conner are launching a 12-part Wonder Woman story in the third Justice League issue.

Walmart will display these comic books from 1 July on its shelves. Starting in August, the comics will release during two separate weeks of the month. The Superman and Justice League books are the ones to be launched in the first week of the month, and the other two books will find its place on shelves two weeks later.