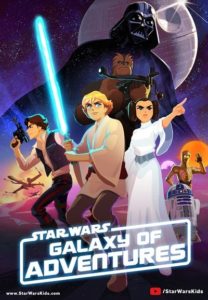 Disney will soon be launching a Star Wars themed YouTube channel for kids which will also feature a new show titled Star Wars Galaxy of Adventures.

The show will consist of a series of short animations about the original Star Wars stories. Debuting on 30 November, the show will combine original dialogue, music, and sound effects with new animations and include educational content along with content for older fans, parents, and others.

Lucasfilm vice president for franchise content and strategy James Waugh told StarWars.com, “With Galaxy of Adventures, we wanted to craft something that allowed parents to help their kids take their first step into a much larger world whether they were ready to show their kids the films or wanted to find new ways to explore the content. Over the years, I’ve had so many of my friends who are parents tell me how much they wanted to introduce their kids to Star Wars but didn’t feel that their kids were quite ready for the movies yet. They wanted a way to celebrate the universe they love.”

Other shorts will be releasing in December and throughout 2019, leading up to the theatrical release of Star Wars: Episode IX, the final film in the Skywalker saga. The show, Star Wars Galaxy of Adventures will air on YouTube channel, Disney Channel and Disney XD.