If you need an extra-ordinary experience through the form of art, then you could definitely buy a comic published by Mumbai-based Crimzon Studio. 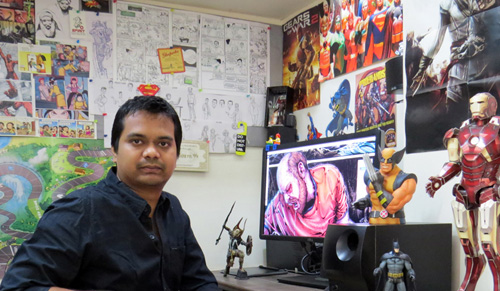 Founder Amit Ghadge’s  main objective was to start a creative powerhouse  that would create opportunites for Indian comic artists to showcase their talent to all and sundry in India and globally.

“I had thought about creating a comic based on futuristic concepts, and had shared the same with my writer friends Avinash Singh and Vijay Verma who are also co-founders of Gardener Media. All of us are avid comic readers and followers, and we have come to understand that  the comic book is the best medium for certain kind of stories. So we came up with the story of The Wreck Age,”  says Amit to AnimationXpress.com.

The Wreck Age is set in a post-apocalyptic period and the apocalypse has taken a toll on humans who were then ruling the world but now are completely out of  the equation. It is the story of survival of humans in the most hostile age they had ever witnessed – The Wreck Age. There are seven different species reigning over different parts of what’s left of the planet Earth. There is a lot of politics between allies and adversaries while humans are trying to resurface and re take their planet.

Comic lovers don’t have to wait long as Crimzon is all set to release its issue#2 very soon. The scripting for all the six issues has already been completed. 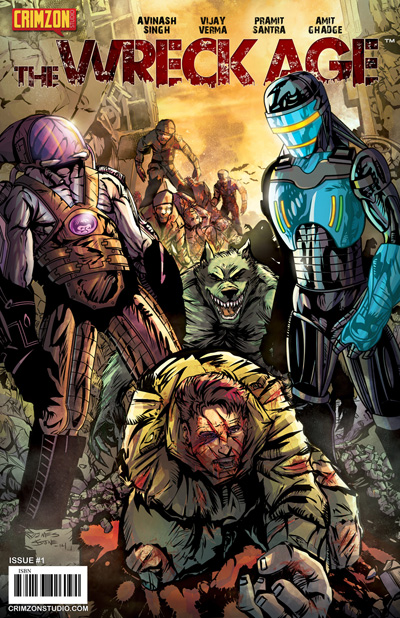 Says Amit: “We are going to release our first issue at the Bangalore Comic Con. Later it will be sold at different Comic cons around India. It’s an open platform and we don’t intend to focus on any specific audiences. On the one hand we want to engage the comic enthusiast junta who is already aware of the type of content making its way into the market; on the other hand our objective is to appeal to those who are new to reading comics. We believe there is a lot of possibility for that in India.”

The Wreck Age didn’t come easy to them.  A lot of effort has gone into producing a comic book that appeals to both domestic and global audiences. The concept and story was written by Avinash Singh and Vijay Verma, whereas the penciling was done by Pramit Santra. Inks and colors were done by Amit and letters by Khushnaz Bode. The cover art was created by Artist James Stone.

Issue#1 consists of 36 pages and is the prelude to the 7 book series. Apart from the story it will also feature character art, excerpts from the script and a poster. The comic is being made available in only print format for now.

“The book is priced at Rs  150  but will be given out  at special discounted price during Bangalore Comic Con. We will have free copies and posters to give away (we haven’t decided on the numbers yet) but along with the book we will also be giving out other promotional arts for free,” expounds Amit. Apart from The Wreck Age, Crimzon Studio is also working along with Gardener Media on two other titles of  different genres.

One of them is for all those unaware of  life in Mumbai’s local trains.  “It’s an anthology project based on Mumbai local trains called Train of Thoughts and what can be a better place to release it in its home town at the Mumbai Comic Con,” ends Amit.