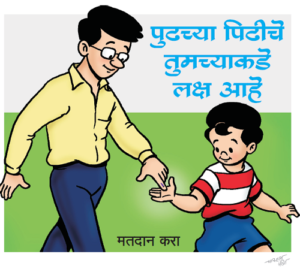 Maharashtra will vote for Lok Sabha Elections 2019 in four phases. The polling dates are 11, 18, 23 and 29 April. With the elections falling on a Monday, youngsters tend to grab the opportunity of this long weekend and go on outings. Indians are made aware about their right to vote through various campaigns.

What connect with the citizens are the comic strips that are published by artists through various mediums. Comic is a medium of expressing ideas through images. A few comic artists shared their work to make the common man aware about the scenario in the society and how important it is for every voter to make his/her choice.

Comic artist Ahmed Sikander’s work is not just funny, but maintains his aim to provoke thought in the most interesting and honest way. “They sometimes may be dark and gritty, but that’s the way I like to communicate my point of view,” says he.

Sikander’s comics depict the dark side of politics, which is necessary for the readers to understand and help them to make a good choice by casting proper vote.

Another comic artist, Rahul Bhandare feels, “We often feel this frustration that there seems to be no good political party. And that is precisely why we need to vote. Because when we vote, we send a clear message to every leader regarding what is okay and what is not.”

Bhandare’s comic, though basic, says a lot with the visuals and minimalistic dialogues.

These young artists have chosen this medium as a pathway to reach Indians and generate awareness in today’s generation. “We make it clear that our leaders are accountable for our well-being, and that their actions/inactions are being closely looked at by every voter. So for the sake of our freedom and progress, no matter how hard the choice, we must make one. And we must vote!,” Bhandare mentions.

Veteran comic artist Charuhas Pandit whose comic character Chintoo has reached every household of Maharashtra, tries to create awareness in the sweetest manner with the help of the cute boy protagonist, Chintoo.

His comic tells the story of every voter who gets all the attention from all the candidates, but…only during this prime time.

Pandit points out the reality with simple yet effective comic.

As citizens, common people can change the entire political scenario with their single vote. If you need to see a change, either break it or make it. Cast your vote, its important!