Amidst the battle-arena of esports that is largely dominated by male players, the armour of this all-girl CS:GO team GE: Rayne (owned by Global Esports, India) shimmered bright and strong at the Legion of Valkyries (LoV) for Counter Strike: Global Offensive (CS: GO) tournament as they secured the second position at the tournament. It was a proud moment for India as the gang of four (Saloni ‘Meow16k’ Pawar, Dilraj ‘COCO’ Kaur, Mansi ‘Matka QueeN’ Sottany, Neha ‘CaspeRR’ Sottany) posted their triumphant moment with the country’s flag holding tight on the official social media post.

Recently Animationxpress had an interaction with the GE:Rayne team captain Saloni ‘Meow16k’ Pawar who started her self-motivated gaming journey at the age of 15. Having started playing games for recreational purposes in between her studies, she eventually realised that there is a whole new world of gaming community where tournaments are held, greeting sessions follow and more importantly where the community comes together to congratulate the new and the best players in the regional platforms. Learning about gaming sparked her interest into taking up gaming as a profession. Being a streamer, she realised that “not even a single streaming player is into the limelight so why not we be the first one? Initially I was not great at the game but I wanted to become better and better and that zeal pushed me to keep trying things to be at the number one position. Since last two years, I have been planning to be at this level and now after the tournaments were announced, so was the team, I never thought of leading an all girls team and become a professional in this segment. I initially thought of having a mixed team of boys and girls but God had other plans for me.” What makes a team strong? Is it the bonding? The 20 year old captain of all girl team shared the backstory as to how they became a unit as GE: Rayne. Like any other game-buddy story, these girls connected over gaming. Even though they were well-acquainted with each other for over three to four years, they had never thought of becoming a team. “There has always been a mindset that maybe we will all have ego issue. May be they won’t be able to fit in with each other. We used to play together but we never thought of being in a unit and then actually went for all-girls line up. During that time, the Legion of Valkeries tournament was announced and two girls from the team were interested and asked me to play. I said yeah, why not?,”she added. Ever since then, the journey for GE: Rayne started as they all liked the fact that they could play as a team so they not only participated in another tournament but also qualified for the same . Despite securing the second positions at finals of LoV, they couldn’t achieve the first place which left them broken and disappointed. Ruefully so, they felt they could have done better with some practice. “We did not even think that it was an achievement to come second as we were all disappointed about the round that we lost because of some silly mistake and it has revolving around our head and it was disappointing us,” shared she. 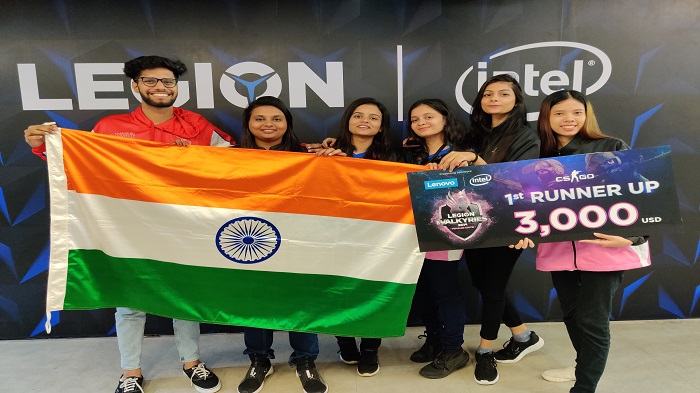 While they were in Thailand, they couldn’t connect with the community until the time they came to India. Elaborating on her experience, she noted, “We did not even realise actually that everyone was proud of us and we actually thought maybe we could have done better and maybe we could have won and made India more proud! As we came here, people were all chilled and were so happy and so proud. We realise that we have done something nice by securing the second position. This boosted us a lot, to be very honest. That time, we thought we are better players and we can do better and from then on, we have been putting more efforts as a team.” Apart from tournaments, they started bonding over matches where they met and played games in the same gaming café. She added, “We had literally bonded while talking both in-game and off-game. No matter what happens in real life or gaming commercial life, we try to stay as transparent with each other and it has all happened after we decided to come together as a unit.” Life is not a bed of roses as there are challenges everywhere. One of the inspiring and memorable gaming experiences for the team which she recalls was the second qualifier for the WESG where they wanted to win the game anyhow. “Because it was a very renowned tournament qualifier and if we would have qualified then we would have been considered the best amongst the top players. So we wanted to win it anyhow no matter what. We really tried hard. It was a best of three events. First match we lost and we all were losing hope. Even I didn’t think I could get better. But towards the end, everyone performed so well and we ended up winning that qualifier and that was the best moment. And since then we started calling ourselves the comeback queens and we always have been doing our best in the times we seem to be losing.” We also get to know that Pawar enjoys playing DOTA2 and Apex Legends as well and she wants to become “a professional streamer someday like one of the best streamers of the particular regions.”