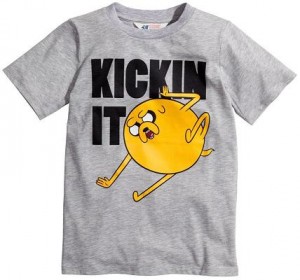 “Adventure Time has proven itself as a brand that resonates with fans of all ages throughout the world,” says Johanne Broadfield, VP of Cartoon Network Enterprises, Turner Broadcasting System, EMEA. “Through creative collaborations with global retailers like H&M, our fans have the opportunity to express their individual style through looks inspired by their favourite Cartoon Network shows and characters.”

Cartoon Network has also announced that Adventure Time has been greenlit for seventh season. The series attracted 132 million viewers worldwide and reached 38.5 million kids across the globe. Adventure Time’s unlikely heroes Finn and Jake are buddies who traverse the mystical Land of Ooo and encounter its colorful inhabitants. Created by Pendleton Ward and produced by Cartoon Network Studios, season five of Adventure Time is currently airing across Europe, the Middle East and Africa and season six will premiere in the region beginning in spring 2015.