After two months of PUBG Ban in India by the government due to data security concerns, online multiplayer battle royale game and a popular esports title PUBG Mobile has expressed that it will terminate all services and access for Indian users from 30 October 2020 on its official facebook account. 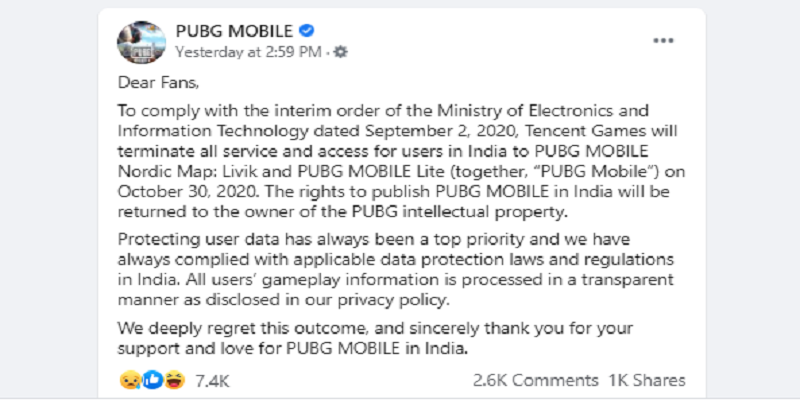 The government of India banned 118 mobile apps including PUBG Mobile and PUBG Mobile Lite back in September under Section 69A of Information Technology Act 2009. Soon after that, both the games were removed from Google Play Store listing. However, users can still play the game if they already have it installed on their smartphones. But that’s set to change from 30 October as Tencent Games has announced that they are terminating all service and access for users in India.

Additionally, Tencent Games has also emphasised on the fact that protecting users data has always been their top priority and they have always followed the government’s laws and regulations on data protection.

PUBG Mobile has recently withdrawn the franchise partnership with China-based Tencent Games to drop the Chinese tag. Also, Krafton, the South-Korea based video game holding company that owns PUBG Corporation, has posted a job listing on Linkedin for “Corporate Development Division Manager” suggesting that the game might return to the Indian market under the umbrella of its parent company PUBG Corporation. However, with servers of the game going offline, it might mark the end of Tencent’s PUBG Mobile journey in India, at least for now.