Minions have been crowned the Clash of Clans champion in the Skyesports Gaming Series 7. The team took down S8UL in an exhilarating grand final to take the first place and the lion’s share of the Rs. 2,00,000 prize pool.

Minions put up a dominant performance throughout the Skyesports Gaming Series and didn’t lose a single war. The grand final between Minions and S8UL was the second encounter in the gaming series between the two clans. In their last battle during the upper bracket finals, Minions had defeated S8UL.

S8UL’s hope for revenge in the grand finals couldn’t be accomplished as the impenetrable Minions took them down for the second time. From the five attacks, Minions managed 14 stars and an average damage of 99.8 per cent. S8UL, on the other hand, could only get 12 stars with an average damage of 89.8 percent.

The Clash of Clans Skyesports Gaming Series 7 witnessed 130 teams registering for a shot at glory and the huge prize pool. They competed across four stages of qualifiers with the top eight making it to the playoffs.

Here is the complete bracket for the playoffs: 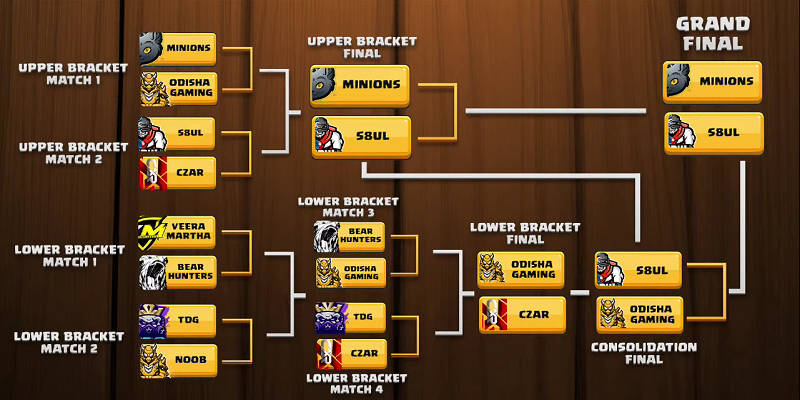 The Rs. 2,00,000 prize pool will be split between the top four teams as follows: