Thanks to COVID-19, gaming’s success in 2020 is evident in worldwide entertainment. According to YouGov white paper, titled ‘Gaming and Esports: The Next Generation,’ on an average, four in ten gamers have been playing more during the coronavirus outbreak than they were last year.

YouGov Global Sector head of esports and gaming Nicole Pike said, “This year the global video gaming industry has captured the attention of brands, marketers, and investors on a large scale. But this year has also highlighted just how quickly things can change in the gaming ecosystem, making it difficult for advertisers and sponsors to know if, when and how to spend wisely – and for gaming companies to determine how much more growth is on the horizon.”

Key findings of the report:

> South and South-East Asian countries generally have a higher percentage of mobile gamers and a lower share of console gamers. In India, just 12 per cent play on consoles compared to 67 per cent who use a smartphone or tablet.

> Seven out of 10 (71 per cent) people in India claim to be gamers, playing video games or mobile games on any device which is similar to Hong Kong and the US. 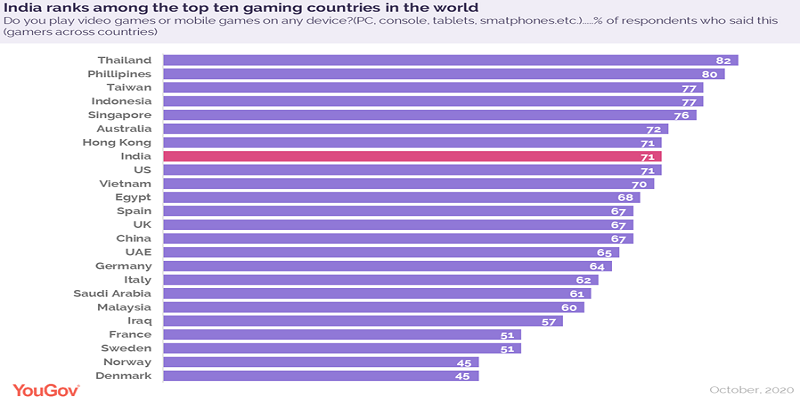 Awareness of streaming platforms among gamers varies heavily from market to market. Twitch, YouTube Gaming, and Facebook Gaming are the services gamers are most likely to be familiar with. 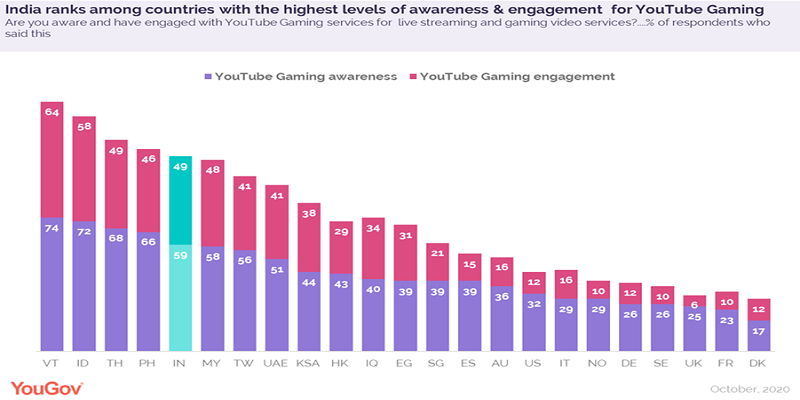 > Esports familiarity market in India is 31 per cent which is similar to Saudi Arabia. More than a quarter of consumers across all nations are familiar with esports. This suggests that, regardless of its relative familiarity, it has a growing foothold on the public consciousness; although there may be more esports rights holders and game publishers who can build more awareness in many of these markets.

Esports familiarity among the Indian gamers is 36 per cent which is equal to gamers of Italy and Egypt.

> When it comes to the games themselves, those in the multiplayer online battle arena (MOBA) genre, such as League of Legends, and those in the first-person shooter (FPS) genre, such as Call of Duty, are consistently popular among esports fans in most markets. The best part of esports is the engagement and in India, it is 22 per cent.

> They have categorised how often smartphone gamers play on mobile devices excluding tablet computers in India and they are as follows: 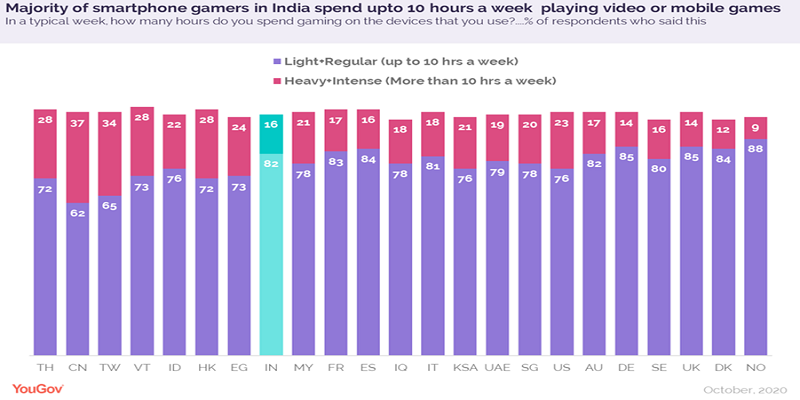 > The proportion of gamers who actively engage with streaming platforms –those who watch videos, upload their own content, or both – varies greatly from market to market.

According to the study, many gamers said they have been gaming more during the coronavirus pandemic vs. the same time last year. But while it may be easy to think of the COVID-19 period as an opportunity for developers and publishers – who, in the absence of other entertainment options, may have had something close to a captive audience this year – it has had disadvantages. The COVID-19 crisis has resulted in a number of game delays: 343 Industries has postponed Halo Infinite to 2021, leaving Microsoft without a marquee launch title for its new range of consoles; major companies have announced layoffs; and if the virus leads to a downturn in global consumer spending, HD video games and gaming systems may become more of an extravagance for households that have suddenly become more cash strapped than they were before.