Esports in India is a burgeoning industry and in the last few years the industry has evolved exponentially. In fact the esports landscape in India has become a tempting industry for investors and brands. Recently VentureLand Asia acquired 40 per cent stake of Revenant Esports which helped the brand grow. The esports organization aims to grow holistically on every title they add to the roster.

In conversation with AnimationXpress, Revenant Esports founder and CEO Rohit Naresh Jagasia said, “The investment really helps us amp up our operations drastically. We made some major moves in the BATTLEGROUNDS MOBILE INDIA (BGMI) scene by acquiring some of the most talented players in the country who have even represented India on a Global level. Aside from the financial point of view, it is a great strategic partnership with Ventureland Asia as they are experts in brand building. They have helped budding brands like MasalaBaby grow and we look forward to building a formidable Esports company with their support. We know we are in the right hands with Ventureland Asia and we couldn’t be happier.”

The upcoming launch of Battlegrounds Mobile India game will have a strong influence in the growth of the Indian esports in 2021. Thus, even before the launch of the game, Indian esports organisations are setting up their BGMI roster.

Recently, Revenant Esports also revealed its roster which received overwhelming response. Commenting on that, Jagasia revealed, “We are really excited about partnering up with one of the best talents for our Battlegrounds Mobile India roster. Encore (Rishabh Katoch) and Paradox (Parichay Bansal) are some of the most sought after and experienced talents in the country. I think they bring a lot of experience on the table after representing India on a global level. AustinX (Sujoy Das) is one of the best assaulters in the country, he brings raw gun skill and significant experience with him for Revenant. TopDawg (Ankit Mehra) is a hot talent in the BGMI scene in India right now. Him being an underdog will be our trump card and under the guidance of Paradox, Encore and AustinX he will surely shine as a player. 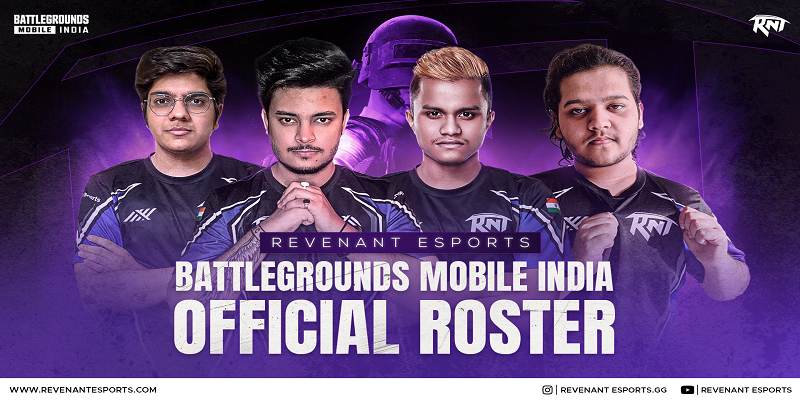 In fact, in a few official tournaments and scrims we have already been seeing TopDawg and Encore making it to the top fragger leaderboards. We are also excited to have Vedang Chavan (Vedzz) joining Revenant in the capacity of the Head Coach. He was a pro PUBG PC player and he will be working very hard with the boys to get the best out of them.”

A lot of underdog esports teams have grown up over the last one year. Commenting on the challenges faced by those esports teams in India, he shared that the major challenges they are facing today is the lack of good performing devices, support from the family and monetary support. Apart from that, since esports is still growing in India therefore most underdog teams here do not get enough opportunity in this space.

He added, “However, at Revenant, we try to focus a lot on underdog development. Currently we are doing a lot of activations in the Call of Duty Mobile scene with a league called X-League which is an underdog only league. We also have two academy rosters in Call of Duty Mobile.”

Revenant Esports also has a few Call of Duty Mobile teams. The game comprises two modes – Multiplayer Mode and Battle Royale Mode. He shared, “We have one of the most celebrated lineups in both the modes. Our Battle Royale Team has been one of the most consistent and top performing teams in India. They also stood #2 in the Call of Duty: Mobile India Challenge by Nodwin Gaming. In the Multiplayer Mode, we have around four-line ups. One consisting of an all-Indian team to compete in all the Indian Tournaments. The other one is an International Team for Asian Events and Tournaments consisting of players from Malaysia, Singapore, Korea and Australia. Revenant also has two Academy Line ups in Call of Duty Mobile: Multiplayer.”

They had small community tournaments for FreeFire and they plan to expand more aggressively into FreeFire also in the future. Apart from that they are optimistic about their future plans for League of Legends: Wild Rift and aim to grow holistically in those titles.

“With respect to Valorant, it is a PC game. So, whenever we see a sizable and strong opportunity to get into PC Titles, Valorant will be one of the first ones we will consider,” he added.

In our opinion, the increment in the user base, content creators, and tournaments will be directly proportional to the investments made in the esports and gaming start-ups.